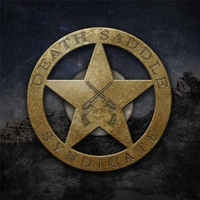 Trio acts are hard to come by at times. When one does come out of nowhere it is usually a good thing. In the case of Death Saddle Syndicate, whose line-up consists of singing drummer Michael Davis-Penta, virtuoso bassist Jedd Chlebowski, and John Leonard, this trio have got a rock hard sound, that can reach generations both past and present. That said, this trio has gone on to write and record an EP that they went on to self-title.

This self-titled EP release is described as hard rock, alternative with some independent stance thrown in for good measure. The EP from front to back though is a decent piece of work. The trio of songs provided on the release, go hand in hand with its musician count of this act being a trio, as mentioned prior. One of the songs that tends to stand out the most of the three is one called “Darkest Times”. This song brings to mind that of another rock act one called Pearl Jam with their one hit wonder classic “Daughter”. Now the two songs may not sound exactly the same but are somewhat close enough. The melodies are there, having their own uniqueness and creativity.

The other two tracks “Down and Out”, and “You Whisper”, one being the opener and the other the closer. The two thrown side by side to one another has each one, doing their own thing. Each one has its own thing going on. Like take “Down and Out”, the song itself stands by itself as sounding a lot like Alice In Chains if not even some essence of Pearl Jam yet again. While “You Whisper Loud”, has some energy flowing for it falling along the lines of perhaps some Soundgarden going on. It’s that hard rock, progressive rock, that is edgy, angry, with lots of emotion, pride, and passion.

Death Saddle Syndicate as a trio act is interesting, it works on the fence of sounding a lot like the acts that came before them. It has these guys standing out as any other act on the scene at this time, allowing them to do what they do with creating their own hard rock music. As far as the vocal chords and instrumentals, both go hand in hand with one another. Each playing off each other is where it really comes into focus. The vocal chords are done well, blending in well with the instruments, having it come together as a whole full circle sense.

This self-titled release, is a piece of work, that has got style, in both the music and it’s musicians. Death Saddle Syndicate is one of those acts that is here to stay, and with a self-titled release as good as this one, this is just the fresh start to where these guys can go. If not having them going places as it were, this release will do such a thing. Not much more can be said then that really. You got the rock, roll, and hard rock heaviness that can only be the trio that likes to be called the Death Saddle Syndicate.