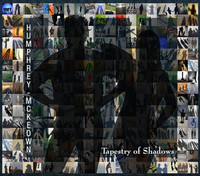 The Windy City has been called home by a variety of first class artists and musical acts over the years. Songwriters Heather Humphrey and Tom McKeown demonstrate on their fifth album, Tapestry of Shadows, that they deserve inclusion with those names. The dozen songs on this new release show the same penchant for risk-taking that defines the earlier releases. The thrust of much of the band’s music has strong Americana roots, but the duo and their fellow musicians mix up their traditional approach with some twists and turns that newcomers might not expect. The blending of these various sounds never falls short and the collection’s cohesiveness is one of the classic hallmarks of all topflight acts. Humphrey and McKeown have hit a new peak in their partnership with this effort and their complementary talents are deepening with time.

The first song, “Beautiful”, keys off the deceptively simple sounding interplay between mandolin and violin and the attractiveness of this exchange remains consistent throughout the entirety of the track. There’s a gorgeous earnestness about the way Heather Humphrey and Tom McKeown’s voice intertwine with each other – they are a natural fit however they structure their vocals, but that aforementioned earnestness comes through most strongly when they are singing together like they are on the title cut. “Better Day” has a slightly darker edge than the opener, accentuated by its slithering tempo, but melody remains the abiding bedrock of the duo’s compositional sensibilities. The banjo incorporated on this song has a strong effect on the listener without ever seeming too much like what we’ve heard before. One of the across the board great qualities that Humphrey and McKeown show throughout is how well they pour old wine into new bottles – traditional melodies and instrumentation are turned to unfamiliar ends while still retaining their recognizable qualities.

“You Don’t Know Me” is an even darker turn than the aforementioned track and the vocals do an excellent job pulling this off without ever becoming too self indulgent. The bass opening the song is soon joined by some gradually evolving piano lines and the patient weaving of the song’s musical elements pays off from the first. McKeown and Humphrey switch off lead vocals to excellent effect. “Sasha on the Carousel” is another high point on the release thanks to its gentle lyricism and one of Humphrey’s best vocal performances and trading off lines works once again for the two singers. One of the album’s late jewels, “Passing Shadows”, has a theatrical intensity that, fortunately, never bites off more than it can chew and presents some of the finest lyrics on Tapestry of Shadows. Many of the album’s songs have a darker cast to them, but the duo never cheapens those moments with short cuts or trite clichés. “You and I” has a slightly droning quality thanks to the brief, repetitive piano line. The violin and vocal presentation further flesh out the performance, however, and make it one of the album’s possibly underrated highlights. Tapestry of Shadows has much to offer purist and casual fan alike – not a single song sounds like anything less than a genuine band vehicle and the traditional elements in each performance are quite credible. Humphrey/McKeown have written and recorded their best album yet.