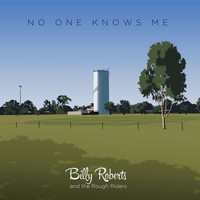 When it comes to a song, having a run time of around 1 minute to 2 minutes in length, you usually think of a punk band whether that would be plain old punk, punk rock, horror punk, hardcore punk, the sub genre listing for the genre that is punk is endless really. But in this case of song length and genre choice, we are going with a mixture of country, rock, and country rock, for an act called Billy Roberts and the Rough Riders. Their song turned single “No One Knows Me” off their album “Greenbah”. The song is indeed short not super short but it’s run time is around 1 minute and 57 seconds, which is quite short for a song, and again would bring to mind that of a punk band, because their tracks are usually that long in length.

For an act like Billy Roberts and the Rough Riders, their style is that mixture said above, it consists of country, country rock, and rock; but in reality it just goes by so quickly it is hard to notice or even tell what the genre choice really is unless you listen to it, again and again. Which is in fact what I went ahead and did. Listening to a song once is one thing, but hearing time and time again could be good or bad. Hearing this track several times in a row, brought out that mixture except it sounded a lot more modern based, the instruments working with the vocal chords, having the music sound more rock based with slightness to the country side and tone.

The vocal chords and instrumentals worked well with one another though. Each one playing off one another as the song glides on through. It ended up being rather enjoyable. In fact, at times hearing the song several times in a row, it felt as if the song was slowing down, so that made it more interesting to the ear. The song kept the same tone and styling as it played onward, but it felt easier to take in and really tap your feet and bob your head too.

When it comes down to it this song and band, they sound a lot like some other acts on the country rock scene. Like for instance Neil Young or Bruce Springsteen, while those acts are higher uppers than Billy Roberts and the Rough Riders is at this time, surely in no time Billy Roberts and the Rough Riders will be up there right alongside them. If that’s not saying much then there isn’t much more to be said here about this act or this song.

It’s a rather upbeat and catchy tune with an act to follow up on from time to time. Billy Roberts and the Rough Riders is an interesting namesake for one, and their style is catchy and upbeat as just noted. So those things have got something going for this act, while the genre choice may not be for everyone, some may take a liking to it, in some form or shape perhaps.

Billy Roberts and the Rough Riders is an up-and-coming act that will be going places and making something of themselves in no time flat, because they have got this going for them thus far. It will likely turn heads more than once.