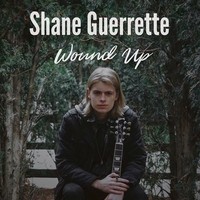 There’s only one other musician, that comes to mind, who has gone out and produced, recorded, as well as written, material towards a music release, which was Joel Grind of thrash metal act Toxic Holocaust. He has been doing his thing from inside his house hold for the longest time. In fact, that’s the same situation for an artist known as Shane Guerrette with his newest song turned single called “Wound Up”.

“Wound Up” as said above, was produced, recorded, inside his own bedroom, why the bedroom of all places, who knows, maybe it just works really well for him, hence why he went for it, and ended up with this single. Otherwise there is no other real reason behind why he did it, but here we are with what is “Wound Up”, which ends up being a very focused yet mellow driven track.

His style is nothing like Joel Grind of Toxic Holocaust, not by a long shot. Shane Guerrette’s style is purely pop meets rock, not pop as far as Lady Gaga or Miley Cyrus standards of that pop genre aspect. But more of a pop rock genre, falling between the areas of such artists as Gavin DeGraw meets James Blunt. Having a mixture of their such hits as “I Don’t Want To Be” by Gavin DeGraw, with “You’re Beautiful” by James Blunt. Both coming out of the 2000’s era, is what you get with “Wound Up”, except a more modernized style of choice provided here.

Shane Guerrette’s vocal range and chord style, is a lot of Gavin DeGraws formula, having that high pitched tone of voice, that just echoes recognition. Like when you hear his voice, you will instantly, know that this is Shane Guerrette’s voice and his style of music, after hearing just a bit of his vocal chords. That’s how much Shane has got going on, with this single of his. It’s like one of those tracks you can find yourself relating too if not enjoying more than once. Having listening to this song, quite a few times, for this review, it began to become more energized and upbeat, through each listen. Shane just gives it his all, putting everything into his music, whether it’d be plugged in electric or unplugged acoustic. You can get that flare of sense that is being put off by him. His momentum of style is just that well put together.

All of this being said here and now, there is just so much that can be said and found with this guys music. Listening to the song again more than once, you like get sort of a different experience each time through, because each listen, you can pin point something new, that you hear, that’s what makes Shane’s ability as a musician so much fun and interesting. He can bring out those guitar riffs and vocal chords that are so memorable and unique, it layers the music together, that it brings it full circle, each and every time through.

If you are not keeping up with Shane Guerrette’s currently, then be sure to keep an eye out for him. This young man is going places, and this is just the beginning, to where he will go next, or most likely end up next. There is no telling really, because his talent is so flawless and masterful, that this guy can end up being the next big deal for the music scene, given him the right time and placement. He will get there in time flat, if not sooner than that. Who knows really, but be one to keep an eye out for Shane Guerrette that is for sure!