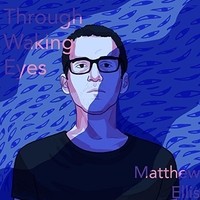 Matthew Ellis is a singer-songwriter from Ohio who performed and produced this fourteen-track album, titled, Through Waking Eyes alongside multi-instrumentalist Cara McQuate. This album, released in early November of last year and mixed by Jim Roll of Backseat Productions, is Ellis’s second effort, following his debut album released in the summer of 2014 titled, A Collection of Words Left Unsaid. This album, Through Waking Eyes, features Ellis on vocals, guitar, piano, lyre and cello, and features McQuate on backing vocals, percussion, bass, banjo, mandolin, guitar and flute.

The greatest asset Through Waking Eyes possesses is perhaps in its lyrical content. Ellis’s material is pensive and introspective, but also demonstrates a great deal of social insight in a somewhat indirect and subtle fashion. For example, the album often transitions between relationship struggles or other more intimate matters, such as in tracks like “Promises, Promises”, to questions of social importance and communal significance, like in the track “Corporate Hymn”. Ellis presents himself as a tortured poet; the tension and passion that fills this album is both abundant and encompassing. From a musical standpoint, things are kept generally sparse, but greatly variable. In this album, everything from acoustic guitar, clean electric guitar, distorted electric guitar, bass, piano, banjo, mandolin, lyre, cello, and flute can be heard throughout the extensive repertoire of fourteen tracks. This gives Through Waking Eyes a very eclectic sensibility which serves somewhat as a balance to Ellis’s vocals and lyrical content, which, although varied from a topical standpoint, come across as rather one-dimensional from an emotional standpoint. Although the instrumentation on this album is typically very light, somewhat ambient, and only occasionally ventures into detailed, melodic sections, Ellis and McQuate have put a definitive effort into composing arrangements that attempt to create a varied experience from one song to the next. Through Waking Eyes has unity in its conceptual significance, but isn’t an album where every track sounds exactly the same.

Basing conclusions purely off of his performance on this album, for all that Ellis is as a writer and an artist, he is somewhat lacking as a musician. The instrumentation by McQuate and himself, although varied, is often incredibly simplistic and sparse to the point of disinterest and boredom, and sometimes tends to lack any sort of notable melody or interesting variation. A lot of the instrumentation, including some of the synth work and percussive elements, is mixed in a rather ambient fashion that creates somewhat of a muddled sound. The overall ambient mix that is commonplace in this album is certainly an artistic choice, but at times it can come across as an unattractive one because it takes away from any sort of vibrancy, excitement, or emotion that the instrumentation might offer. Ellis’s vocals are certainly questionable; he doesn’t really sing, performing the lyrics instead in what sounds like a weeping, exhausted rasp that one might expect from someone who has just been tortured or mugged. The vocals become tiring to listen to after about three tracks, and are so radically different from any kind of conventional singing that they stand as one of the principal negative facets of this album. The vocals just aren’t good. If Through Waking Eyes had more instrumentation, more melody, and perhaps a hotter mix, these fourteen tracks could have been very polished and interesting.

Through Waking Eyes is an album that possesses both very positive elements and very negative ones. What the album lacks from a musical standpoint it attempts to make up for from an artistic and poetic standpoint, but doesn’t do so unanimously. Basically, Through Waking Eyes breaks even as a modest effort and is suited only to very particular preferences.