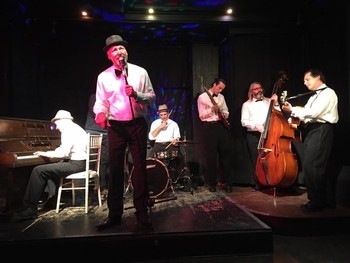 U.K. gents, Tenderhooks, is a 6-piece act, that have been playing for going on 2 years and counting. During which time, the band has written and recorded a handful of releases, including most recent and newest album “Loving Sword”. This album releasing a top notch single turned video for “Brighton Is Falling”, which was then made into a series. So much more can be said about it, as well as the album, that founding father, lead singer, song writer, saxophonist, acoustic guitarist, tambourine player, manager, and just the driving force of Tenderhooks, Markus Leinweber, discusses all about these matters, plus what’s ahead!

NP: Introduce yourself, tell me what you do in Tenderhooks, and how long the band has been together?

NP: Where did you get the idea for the band name, you planned it or came out just like that?

Back in the 90’s I wrote a script about a band called Tenderhooks. It’s a play on tenterhooks as the band get signed but various problems occur in the storyline to derail their ambitions. The script is still in my drawer! But the name rides on….

NP: What’s the story behind “Brighton Is Falling”?

We’re a Brighton based band and I’ve lived here with my family since 1999. It has been a party but lots of stuff happens being a seaside town and the song is a tongue in cheek homage to some catastrophes that have occurred. On stormy days beach huts have been smashed, a friend of mine had a bad wipe-out kite surfing and injured his shoulder, the West Pier did burn down and every weekend the place is full of revelers some have found it amusing to swim in the sea to their detriment. But my final line in the song is, Oh I do like to live beside the seaside! It’s a fab place to live.

NP: For “Brighton Is Falling” you made a video for it, but it includes a short and long version, how do these differ, compare, and are equal to one another?

Yes there are 2 versions of all the videos. Not everyone will be interested in the dramatized sections. We just annex the beginning and go straight into the music video for the short versions.

NP: Why did you want to “Brighton Is Falling” to be the suitable single off “Loving Sword”?

It’s quirky, tells a story, gives the listener an essence of what we are about as a band.

NP: Besides “Brighton Is Falling” being made into a single turned video, you also have it as a part of a series, and episode 3 was just released. So what is this series all about? How many more episodes will it entail?

Yes there are now 3 available to watch, in fact I watched all 3 on YouTube from my television last night. I’m very pleased with what we’ve done. The series is called Brighton Is Falling. Episode 2 is Curtain Twitcher and episode 3 is Blue Sky Train. All the songs are from the Loving Sword album. We’ll be making a 4th episode with a song from Loving Sword and then release the new album in the summer. Hopefully build the story line and eventually find backers to make a proper series.

NP: Did “Loving Sword” see any other songs, be made into singles and or videos, or do you think “Brighton Is Falling” is the one for it?

As mentioned above we’ve made a further 2 videos. I’m not sure you can classify them as single releases. Without a label or management on board it’s very difficult to get anything officially out there let alone get a single or album review. But yes Curtain Twitcher would be the follow up single to Brighton Is Falling.

NP: Do you have any new music in the works? If so, where is the new material headed?

Yes we’ve recorded 7 songs for the new album and will be back in the studio April/May to finish the album. A great bunch of tunes including Rubber Necking, Mother Dear, Little Stunner, North Star, Rustle You Up, can’t wait to get it out there. Album launch party penciled in for 16th June in Brighton!

NP: What do you think of Skope Magazine, putting “Brighton Is Falling”, into it’s month rotation?

Fantastic, we really need the exposure, like all the unsigned bands out there. Hopefully we’ll get some recognition and kickstart a big year.

NP: What does next year hold for Tenderhooks?

More videos, album release, gig in London on Saturday 15th of April. We are taking a coach with 2 bands + fans and this time we have 2 burlesque dancers coming too. Beer festival appearance in August. Who knows what’s round the corner.

NP: Any final words of wisdom?

It’s all about the journey, the camaraderie with band mates, how the creative juices ebb and flow, surprises and disappointments, audiences singing along and cheering, telling the story, leaving a musical imprint, I wouldn’t want to miss this for anything!