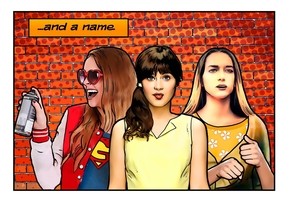 The Truebelles are ready to shake up the pop scene with plenty of soulful energy while aspiring to remodel the traditional image of femininity in today’s world of media and music.

After having been able to gain experience singing with Stevie Wonder’s musical director and bass player, Nate Watts, and doing backing vocals for Coree Richards of Damage, lead singer Grace has now started her own musical project with friends Talullah and Lorena. With the help of producers Steve Snead and Mat Condon, who has previously played keyboard in Katie Melua’s band, the newcomers comprise remarkable vocal skills with the spirit of rebellious girl power. Their funky debut single ‘If Your Heart Is There’ is a melodic bubble gum explosion that creates the kind of buzz that makes you get out of bed in the morning. The track features rapper XYM who is known for having played alongside Colin Farrell in the film London Boulevard.

Check out their single ‘If Your Heart Is There’ here: