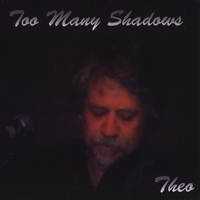 Let’s be honest for just a second shall we. I get a lot of albums sent my way for review and I mean a lot. Most of them don’t do anything for me. They don’t always get happily placed in the CD player, but the ones that do usually get a three song stay of execution and generally if they last past that they get my full unadulterated attention. Sometimes I’m hooked from the first track, and that’s precisely what happened when I put the latest release by Oregon based Singer-Songwriter-Rocker Theo Czuk on. The CD bursts to life with “Out There” and its fantastic rocked out sound that follows through with a wonderful sequence of songs, 15 of them to be exact. It twists and turns the way great albums should with a little bit of rock, a little bit of high octane driven rock-soul and a lot of harmonic goodness. Described as the Kurt Vonnegut of songwriting Czuk is in fact an award winning songwriter and an award winning poet. Czuk has served time as a councilor, a canoe guide, a social worker, a clay sculptor, a teacher, a pauper a poet a pawn and a king (well, not so much the king). Reared on the humble back streets of Detroit, Theo has settled in Oregon and spends his time mulling the green of the great Northwest with his wife, Pi, and their pup, Paisley.

I also really like to song line up — the way each song masterfully transitions through to the next creating much in the way of drama. So many bands and record labels get this basic skill so wrong. They fail to listen to the songs at their disposal and seemingly throw the album together without giving it any real thought. I’ve known people who work to formulas making sure that their best songs start and finish the album with the remaining tracks squeezed between in a slapdash fashion. That’s not the case with Czuk’s   music and his latest effort “Too Many Shadows.” in fact each track could probably survive on its own merits, but the album just flows so well. Czuk could easily be heralded as classic sounding rock but there is so much more to him. I hear Leon Russell, original musical works by Charles Manson, Bobby Charles, John Cleary, John Hyatt, Lowell George. Some pieces stand out like the more appealing to a mass audience “Pull Me Out of the Rubble” and Damned if I do” and “World of Woe” but there’s a deeper and sharper edge to songs like “Kitty’s Songs”, “Moonglow Tango”, ‘Another Round’ of Coffee Grounds” the title track and “Your Every Wish” which is my favorite track on the CD by the way. The strategic interweaving of systemic melody and impressive vocal performances from Jenkins is a delight, but the solid rhythmical foundation of Czuk and his band is essential to their artistic and commercial potential. The sound is that of the golden era of popular music in the sixties and the seventies when musicianship mattered! But the beauty of this record is the use of all mod-cons forcing Czuk’s relevance into the modern world. Czuk should achieve good support from radio and appears to be critical darlings of Southern Oregon. But I am left bemused how Czuk is not yet a household name. It’s not a case of all the elements being present but the final product being missing as the songs, the musicianship, the production, and the performance all knit together beautifully-even brilliantly. Maybe I’m lucky enough to be in on the ground floor? Maybe things are just about to kick on for Czuk?

Whatever it is make sure you get hold of his latest CD entitled “Too Many Shadows” by Theo Czuk — it’s a must have and in the class of al by itself.