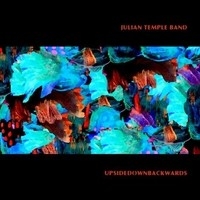 Julian Temple’s description of his sound is “Surf Noir.”

Confession: I don’t know what “Surf Noir” is. Surf rock harkens me back to the “Learn the Guitar with The Ventures” albums or the frantic, string-busting lead of Dick Dale. That is not what this is.

This is an 11-track compendium of dark-tinged, acoustic matter that abjures conventional genre placement by the native New Zealand band. Many familiar facets appear through the raw grunge surface the likes of the slightly-across-the-way, genre-bending Nick Cave to a vocal range that encompasses the gruff growl of Tom Waits to the airy, upper range crooning of Shawn Mullins.

Opening with the repetitious, jarring “My Heart” the instrumentation is slightly under the surface of the track with Temple’s vocals at the foreground. Acoustic strum ushers this one in with accompanying thump bass line and slight backing percussion until the eruption at the chorus. Spiked with violin plucks and fills, this one is minimalism run amok. “Dark Bar” again opens with acoustic strum until the blues-tinged, full groove of the musicality bounces along with the vocal delivery reeled in to melodic. The strings again serve the fills and lend a strong accent to the track (and will continue to through the girth of the album). Title track “Upsidedownbackwards” is the first time change removal on the album. The dark ethos of the album continues in this one but with a slightly eerier melody, weepy string lines and the croon/howl of Temple’s vocal delivery. What’s interesting at this point is the implementation of the same instrumentation; yet varying “feels” from track to track. The mid tempo tracks continue with “Bottle of God” and it’s strum acoustic melody, brush snare work and a constant string undercurrent. Again, this one is also removed from the preceding tracks and ventures out in its own direction. Folky in its execution this one; could perhaps be the most radio-ready of the tracks, barring the perhaps slightly controversial lyrical matter. The socially aware “Create A Desolation” is a raised fist against the “creation of a war to create peace” mentality of governments. This one comes in to percussion opener with the addition of the acoustic, jazz style percussion beats and more string lines. The urgency in the vocal delivery again adds a different scope to the album and continues to see the band treating each track as individual.

Funky and eclectic doesn’t really sum this one up. There are myriad musical factions at play through the 11-track breadth of the album. The amalgam of sounds and musicality achieved from track to track is impressive given the same instrumentation; allowing “approach” to dictate where any given song goes. I don’t know of a genre that encompasses the sounds and feels on this album as it moves from melodic (Like if Jack Johnson ever wrote with “substance” in mind, it might sound vaguely like this? Maybe?) to the full aural onslaught of cacophony (Like a dialed-down Jon Spencer Blues Explosion? Maybe?). Either way, this is simply “different” and I mean that with flattery in mind.