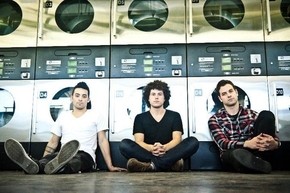 Nashville’s brightest young pop-rock outfit DINNER AND A SUIT have just premiered their brand new music video for “Too Late” — the second single from the band’s full-length debut Since Our Departure.

Directed by Quanti Studios, the “Too Late” music video follows Dinner And A Suit — singer Jonathan Capeci, guitarist Joey Beretta, and bassist Anthony Genca — as they’re introduced to the world while delivering an explosive performance.

Born in New Jersey, DINNER AND A SUIT transplanted to Nashville last year to begin work on the debut full-length. To record Since Our Departure, the band split their time between Glow in the Dark Studios in Atlanta with producer Matt Goldman (Anberlin, Underoath), then with Tyler Orr (As Cities Burn, Copeland) at First Street Studios in Cleveland TN.