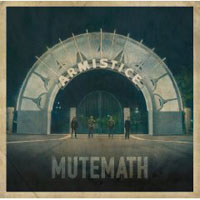 Armistice is Mutemath’s second full length album. The New Orleans based electro alt rock band broke out on the music scene with a self title release in 2006. Here they continue with their shiny brand of electronic rock. The band constructs a full and lush sound through samples, chords and keys.

The album starts off promising as it launches into a funky vibe and up tempo rhythm. The swaggering voice of lead singer Paul Meany sails over the glowing instrumentation. On “Backfire” samples and keys are layered over guitar, and combine into an aggressive and emotive jaunt. The track is full of raw emotion, and there is defiance in Meany’s voice. The production is crisp and the multiple layers create a textured sound. Mutemath is highly regarded as live performers who are able to replicate this pristine studio sound on stage.

The buzzing and thumping electronics permeate the soundscape throughout the album. As we head towards the middle they downshift and embark on some dreary balladry. Meany gets sentimental and resigned on tracks like “Clipping”. Things get predictable and Mutemath nearly fall into the trap of generic alt rock formula. The sentimental mood can get a bit lugubrious and uninteresting – or radio friendly depending on how you want to look at it. Fortunately they are saved by their overall inventiveness and musical virtuosity.

Despite these issues the band is able to redeem themselves later on songs like “Armistice”. From here things pick up. “Last Year” rises above the clichÃ© milieu, with its heartfelt lyrics, and soulful vocals. “Burden” is an epic song with varied composition – it starts out blistering and fast, breaks into a drumming interlude, then finally segues into stripped down melancholy and introspection.

Mutemath are precise and polished on Armistice and although they suffer from some banality it is temporary enough not to overshadow the technical wizardry and musical grandeur that they create.