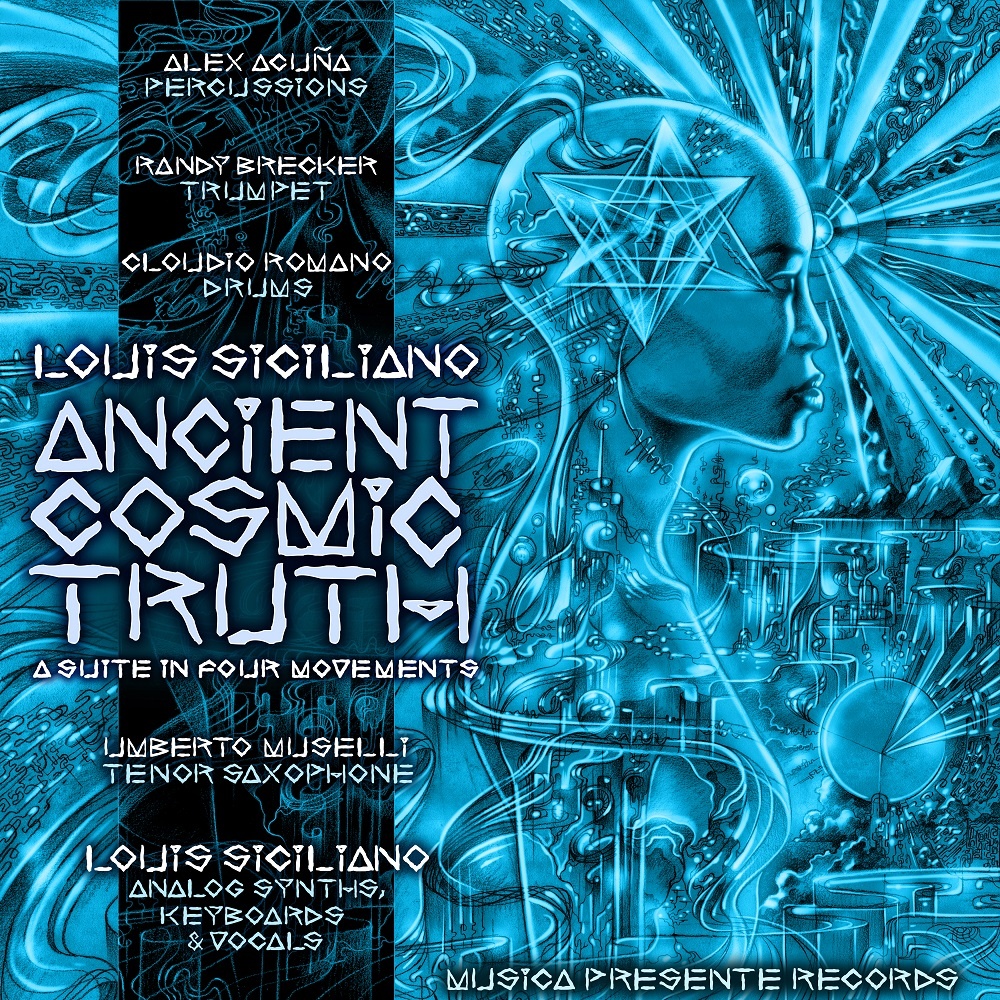 I confess ignorance regarding Louis Siciliano’s music before hearing his new release Ancient Cosmic Truth for the first time. Jazz, even in the fusion style, has never been my thing, Having heard the four tracks on his new effort, however, gives me pause. I’ve missed out on a lot. Those four tracks are a vibrant and lively example of what an inspired composer is capable of and how they leave tired definitions and cliches in the dirt. He’s recruited a first class crew of musicians to help bring these songs to life including Weather Report’s former percussionist Alex Acuna, sax player Umberto Muselli, trumpeter Randy Brecker, and drummer Claudio Romano. It results in one of the finest musical efforts in recent memory and will make a believer out of anyone with ears.

I knew I was hearing special music from the beginning. “Bambara’s Symmetries” has an obscure title, but there’s nothing obscure about the connection it makes with listeners. It has the best melody you’ll hear on the release and the brass leads the way with that without ever shifting any attention away from the other players. There’s a playful aspect about this arrangement that you cannot ignore, but there’s always fierceness in the way each of the five musicians commit themselves to delivering a memorable performance. Siciliano’s synthesizer work deserves mention, as well, due to the vibrant color it adds to the piece.

“Translucent Dodecahedron” feels and sounds like a headlong dive into the unknown. There’s something ancient, indeed, about the steady descent the sound of this track inspires, but it’s far from a hard slog as a listening experience. The same surging imagination and skill driving the opener is present here as well, but it’s amplified and underlined, especially during the song’s near chaotic second half. Brecker and Muselli are stalwarts here, roving free throughout the performance, but their playing is always coherent and serves the overall performance.

Siciliano trades off some compelling musical volleys with Brecker and Muselli during ”The Secret of Mansa” while the rhythm section, such as it is, gives the other musicians a firm foundation to work from. A variety of sound effects further spice up the cut without ever smacking of self-indulgence. It’s a track that, in some ways, is the most traditional of the four. Brecker and Muselli’s contributions wouldn’t sound out of place on a classically minded jazz record and the soulful playing helps make this one of the EP’s most memorable moments.

The title cut “Ancient Cosmic Truth” pushes the envelope like no other song on the EP. The rhythm section attack is bold and in your face while Siciliano makes the brave move of weaving vocals into the arrangement. It works. There are no words, per se, but the presence of human voices in the performance certainly sets it apart from the EP’s other fare. His ability to pull one musical rabbit out of his hat after another is the signature of an artist working on the edge, challenging himself at every turn, and that willingness to move into new areas is one of Ancient Cosmic Truth’s greatest strengths.