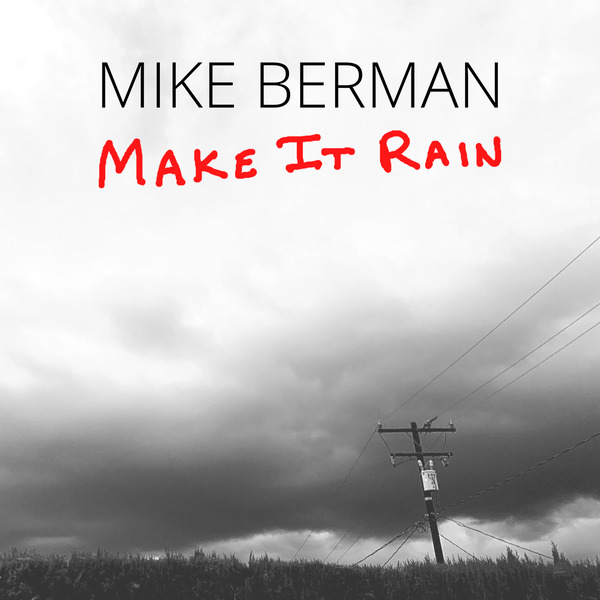 With his single, “Make It Rain,” Mike Berman takes an expression which sometimes carries with it somewhat naughty connotations and transforms it into a positive view of the pouring out love. In the hip-hop cultural vernacular, ‘making it rain’ refers to lavishing pretty strippers at a strip club with dollar bills. However, such a reference couldn’t be further away from the lyrical intent of Mike Berman’s song. He describes its aim as “a prayer, a plea for the cleansing of the land and of the soul.” Not only does his lyric express “the need for rain in the parched Southwest,” but it also crystalizes the emotions of man “lost without love as he watches his soul baking with dry ground.” Therefore, this song is a whole lot cleaner – in more ways than one — than you might assume from its title.

The song begins with slide guitar, which is placed atop crisp drumming. It immediately brings to mind many of those classic recordings that guitarist David Lindley created with and for Jackson Browne. It has the soft rock sound that made Browne as popular with rockers as he was with folk fans. Browne played his folk-inspired songs with true rock gusto, which set him apart from many other Laurel Canyon singer/songwriters in the ‘70s.

Berman begins by singing, “They say in every life, a little bit of rain must fall.” Here, once again, Berman turns a familiar phrase on its head. The familiar saying about how rain falls in every life is a way of describing the way everybody eventually experiences pain and suffering. Nobody is able to walk between the raindrops, after all, so we all inevitably get wet from the negativity of living. However, Berman follows this up by singing, “But it’s been so dry so long.” He’s not worried about getting rained on; rather, he’s concerned about not getting rained on enough. This is smart wordplay because he takes a cliché, which usually has just one specific meaning, and uses it to describe circumstances that are completely different. By doing so, Berman takes the bull by the horn, so to speak, and makes these words say what he wants them to say, rather than what is commonly expected of them.

With the song’s chorus, Berman begs, “Make it rain/Let your love pour down on me.” He doesn’t specifically say what kind of love this is, whether it’s romantic love or spiritual love, but both explanations work. A lack of rain, of either kind, will leave a person thirsty and asking for a love storm. He later sings, “Everybody loves the sun/Until the water all runs dry,” which also flies in the face of most weather-related pop songs. There are plenty of radio songs about fun in the sun, but very few that praise other weather conditions, such as rainfall.

Just as you can’t judge a book by its cover, you also cannot judge a song by its title. “Make It Rain” will likely be quite different from your initial perception of it. And then its lyrics dig even deeper beyond our language cliches. Berman sings these smart words with a gentle, sincere voice. It leaves you hoping his musical rain dance will bring plenty of refreshing raindrops – soon.