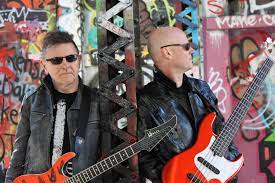 As audacious as some think they are, The Refusers passionately refuse to go along with the program. Could they know something we don’t? Yes ladies and gentlemen, there are new lockdowns coming, there are new jabs coming; and it’s clear that energy systems and food systems are on the verge of failing; the time has come to prepare yourself for a much “angrier world.” How do The Refusers know there is such a dire future awaiting us? Because the government has told us so. Punk rock has always been all about fighting the man, but now it’s about fighting for your life. The Seattle-based combo are dissenters, when dissenting these days can have significant consequences. Freedom is at stake, and the stakes are high. Now that World War III has officially begun in earnest, it might be time to put down your phone, shut off the Netflix, and pay attention. Rest assured that all this propaganda would not be needed if the situation was hopeless.

But it does not look good. As the media asks for “Covid Amnesty”, The Refusers ask for Nuremberg V2. As a criminal globalist cabal assures us “The Great Reset” will save the world, The Refusers ride valiantly as modern day Paul Reveres reminding us and warning us that this familiar cast of characters seen in their new video “Live Free”, do not have your best interest in mind.

The Refusers ask: “How many supply chain breakdowns, social credit scores, false flags, enhanced censorship policies, diesel fuel shortages or carbon ration QR codes will it take before humanity acknowledges the iron heel of this tyrannical boot zeroing in on our collective heads?” Head Refuser Michael Belkin knows it’s better to die on your feet than live on your knees. His outspoken, creative output has been explosive. “Eat The Bugs” has woken up millions. “Dementia” speaks for itself. There is nothing extremist about it. The truth has a certain ring to it and anyone with eyes can see something is terribly amiss at 1600 Pennsylvania Avenue.

The Refusers know their enemy. The “disgusting sleaze” they call out, all spit fire and look decidedly demonic in “Live Free”, a Dead Kennedys meets Foghat sonic onslaught. We see the faces of those that have become household names, as well as others pulling the strings at the World Economic Forum. Belkin and his bandmates have read these evildoers’s playbook and for years boldly shared their knowledge and worldview to many who, though initially laughing them off as wacky conspiracy theorists, have joined the “The Great Awakening” and pledged on the altar of god to fight this global tyranny with every fiber of their being, The battle lines have been drawn and these courageous Pacific Northwest rockers encourage their viewer to dismiss the notion to “Build Back Better”, but instead “Fight Back Bitter” Time is running out, it’s either “Live Free” or die.