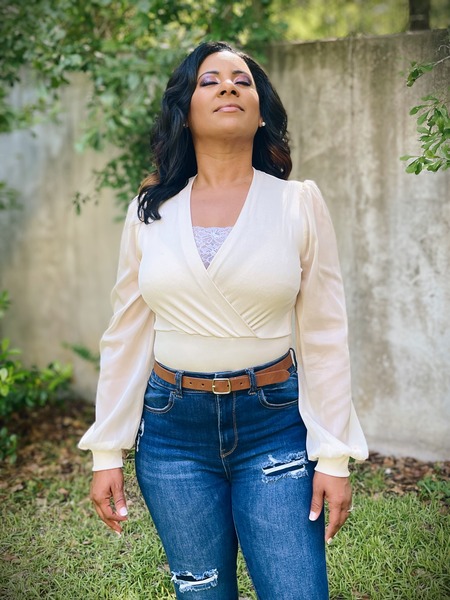 When listening to and watching Angela Moss Poole sing, it is hard to believe that she never intended to be a public performer or pursue solo artistry. She had been songwriting for as long as she can remember, but about 15 years ago, her mother submitted some of her songs to songwriting competitions without her knowing. She began winning awards for her creative works and having to perform them in front of renowned names in the music industry, which made her realize her voice and talents must be shared and heard further. It just so happens that her son’s interest and involvement in music led Poole to her own musical beginnings beyond the church walls. In three years of taking herself seriously as a non-traditional faith-based musician, she’s had multiple charting singles, with “You Deserve” peaking at #7 on the Billboard Gospel Indicator charts in 2019 and “My Help” ranking in the first spot on the chart for five weeks in 2021. She also is a label executive at their family-run record label, 141st Lane Music. Now, Poole is blessing her following with “Speak to the Mountain,” the leading single of her self-titled album, Angela Moss Poole.

To deliver this powerful song, Angela Moss Poole teamed up with Grammy and Dove award-winning producer Fred Jerkins. “Speak to the Mountain” is based on the bible scripture in Mark 11:23, containing words of encouragement for everyone to have faith and be unafraid to turn to God when they especially need his help and guidance. Poole’s voice has verve and power, and her words share nothing short of the gospel truth. The vocal harmonies with her supporting singers are absolutely outstanding, and the instrumental has this delightful, pop- and jazz-influenced groove with its horns, guitar riffs, and rolling drums. As a result of speaking to the mountain, God’s people can overcome any struggles and challenges presented on their lives’ paths — no matter how impossible they may seem — because, like the mountain, God is an immovable source of stability and dependability. Throughout Angela Moss Poole, her God-inspired lyrics are the consistent variable, but it is her openness and aptitude for transcending genres and styles that reel audiences in fresh out the gate with her remarkable, distinctive sound in “Speak to the Mountain.”

It just looks like this faith-based musical crew had a blast recording this in the studio. From start to finish, Poole’s God-given gift shines brightly in the music video, as she visibly projects the spirit-lifting, reassuring lyrics from her soul to her tongue to the top of the mountain and viewers’ devices. When talking about the ultimate takeaway for audiences after seeing and hearing “Speak to the Mountain,” she says, “I hope your faith is strengthened, and you feel the hope, strength, and joy of the Lord.”