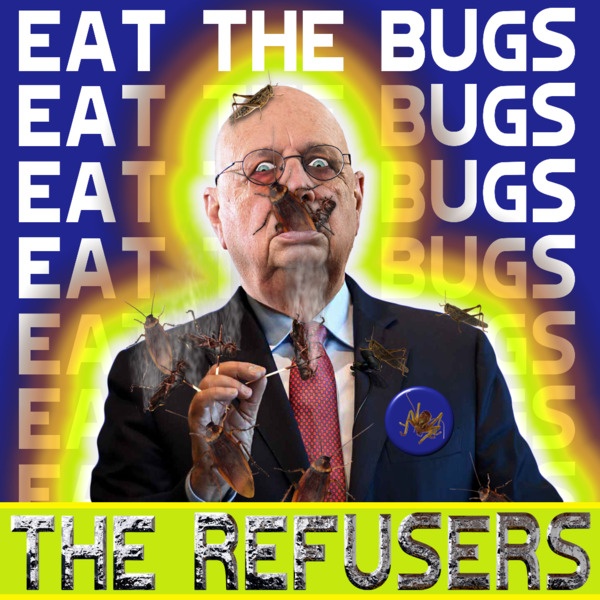 Seattle’s music scene is a long way removed from the halcyon days of grunge and alternative music when record company A&R personnel trekked to the Pacific Northwest hoping to score the next Nirvana. The city, however, retains a strong musical identity and one of its chief exponents in recent years has been the quartet The Refusers. Michael Belkin is the band’s songwriter, but he leads a crack unit of musicians who perform as a band rather than serving up a glorified solo vehicle for Belkin and his vision.

The Refusers’ latest single “Eat the Bugs” attests to that. The socio-political agenda of the band’s songwriting isn’t any sort of impediment to Belkin and his cohorts supplying listeners with a rollicking musical good time. The mid-tempo of the pace of the song builds around a staggered guitar riff. Belkin’s guitar riffing connects for several reasons, but Brendan Hill’s drumming is arguably the biggest reason why.

Each piece of the puzzle, however, contributes to the overall picture. Hill compromises a durable tandem with bassist and background vocalist Steve Newton and the Hammond organ contributions from Joe Doria and Eric Robert’s Nord keyboards add deep color. The aforementioned musicians provide a consistently sturdy foundation for the song from beginning to end.

The chorus will especially be a live favorite as it affords a room full of screaming music fans a chance to sing along. It isn’t a facile message, however, that the song delivers. It doesn’t dazzle us with intricate wordplay or verbal gymnastics. The Refusers, instead, are interested in nothing less than a call to arms and the storm the ramparts spirit heard throughout the track, especially during the chorus, will enchant many listeners.

Music with social awareness ripped from the pages of the daily news is a mixed bag for posterity. Certain bands and songwriters have been able to tap into an universality that goes beyond the typical punk rock rager and achieves eternal resonance. The Refusers fall into that category. It’s short like a good song should be, never prattling on with self-indulgence, and eschews the sort of instrumental grandstanding other musicians embrace.

Newcomers to The Refusers and Michael Belkin’s songwriting, if they are dyed in the wool punk rockers, will enjoy the obvious respect for what makes a great rocker and the band’s clear skill for bringing that to life. The band has opened for a wide gamut of modern music such as The Black Crowes, The Alabama Shakes, Kings of Leon, and The Black Keys, among many others. Their efforts are carrying them up the mountain not because they are in fashion, not because they are pretty or propelled by a gimmick, but because they are authentic and have something lasting to say.

Now it is up to us to listen. We need more bands like The Refusers in this modern wasteland of stunted melodies, lowest common denominator pop, and an increasing reliance on spectacle over substance. “Eat the Bugs” is The Refusers’ latest reminder that there are real bands out there doing consistently good work and trying to inspire rather than merely entertain.