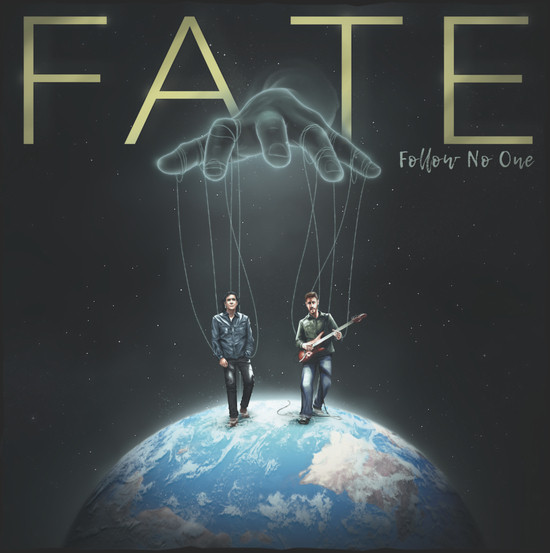 Although they aren’t tasked with pushing a lot of brawniness to the front of the mix, there’s no denying the imposing strength of the guitar parts in the new single “Fate” from Follow No One this summer. From the moment the strings first come into focus, it’s obvious that this song is as driven by instrumental moxie as it is any of its lyrics, and I would even argue that there are a couple of instances in which the thrust of the riffage is a lot more communicative than words ever would have been on their own. This is a band that knows what they want to say and, more importantly, how to use everything at their disposal to say it.

This lead vocal is really rich and smoky, but it doesn’t feel like an indulgent addition to the track at all. Because of the deliberate tone with which our singer is presenting his verses, there’s no evading the emotion he’s using to cultivate the harmony, especially when we get into the chorus of the song. There’s a passion here that isn’t being sourced from synthetics nor some sense of a concept that only applies to one era or scene in the history of rock n’ roll, as has been the case with many retro players posing as mere purists in the genre today. I don’t think Follow No One wants to make ‘classic’ rock per se, but instead something that’s just as removed from robotic and predictable aesthetics as the first couple of rock n’ roll gens were.

The music video for “Fate” frames the narrative very specifically and undeniably, which is part of the reason why I think it’s as much of a standout as I do this June. Follow No One adopts a rather pastoral visual scheme for this release, but it feeds into a surprisingly potent sense of adventure lying just beneath the surface of what’s being said in these verses. It’s as though we’re traveling alongside this lyrical protagonist – always on the move, much like the rhythm of the music, and feeling the adrenaline that comes with fulfilling what your destiny was always meant to be from day one, no matter what that might mean. This is immersive, but it’s not surreal in the same way a lot of other independently released rock has been lately.

Most definitely an intriguing listen for rock fans who are demanding something with a little more substance right now, Follow No One’s “Fate” is a great way of getting to know this band and a sublimely constructed single that doesn’t leave me feeling like I’ve just listened to something recycled from the FM dial. This is a good time to be a fan of the American underground, and it’s the formidable output of underappreciated acts like this one that is making it as much. Follow No One comes in swinging as hard as possible with this release, and while it’s a lot more muscular than what the status quo is calling for these days, that could be one of its most alluring charms.