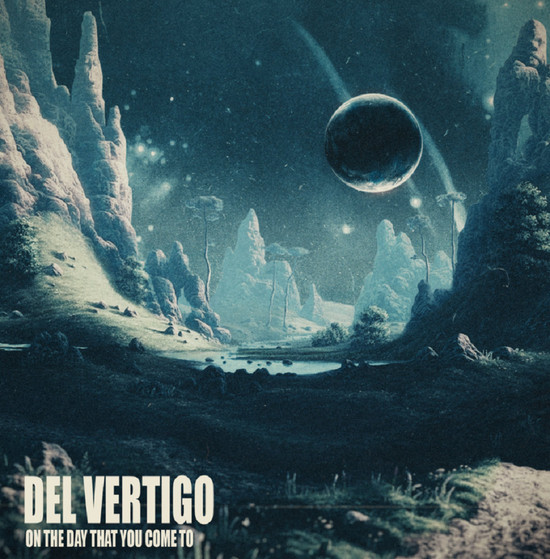 It isn’t always the case that the last song on a record represents the ultimate climax of the tracklist, but in Del Vertigo’s On the Day That You Come To, this just might be true. The titular track in this all-new EP feels like a completion of a journey, better said an odyssey that starts some four songs earlier, shrouded in sludge. There’s a bit of pop centricity in the mix, but it’s buried so deep within all of the carnage Del Vertigo is unleashing instrumentally that we can’t get addicted to any oversized hooks. On the Day That You Come To takes us full circle, and perhaps to best understand its emotional profoundness, we’ve got to understand why it flows together so well.

“The Fall” is much more isolated in tone than the title cut in this record is, but its surrealism should not be mistaken for stoicism. Truthfully, there isn’t a spot of stationary songwriting anywhere in On the Day That You Come To, mostly because I don’t think it serves any real purpose for the story that Del Vertigo wants to assemble from the ground up here. He wants us moving with the music, even when there isn’t much of a groove to get down with, and he’s using the special expressiveness of a non-melody to make his point more than clear. That’s brazen in today’s alternative rock culture, but it’s also something that made the genre appealing to discerning ears in the first place.

“In Dreams” and “Theres a Glimmer in the Thicket” are two halves of the same composition, more or less, and although they give us a lot more brawn than we need for the midsection of this tracklist, I don’t know that their presence here could be considered the least bit indulgent given the artistic premise they’re situated in. If Del Vertigo wanted this piece to be about efficiency, he wouldn’t be giving us as much sonic bombast as he is in every one of these songs. That’s another move that took a little ice in the veins in 2022, but once again, it’s also something that immediately made me interested in what was about to come around the next bend in On the Day That You Come To.

Del Vertigo opens this EP with the stunning “Obsidian Hills,” one of my favorite songs the project has released thus far, and it’s not surprising to me that it’s been scoring the attention it has been on Spotify lately. There are brooding undertones to every part of the macabre musicality in this piece, and if you think you’re going to find as much just by searching through the indie channels this spring, you’re in for quite the surprise indeed. This is, by all accounts, a diamond in the rough, and a record that I don’t think anyone was expecting to hear from Del Vertigo at this particular stage of his career. As I see and hear it, this is a bar-raising piece no matter how you break it down.