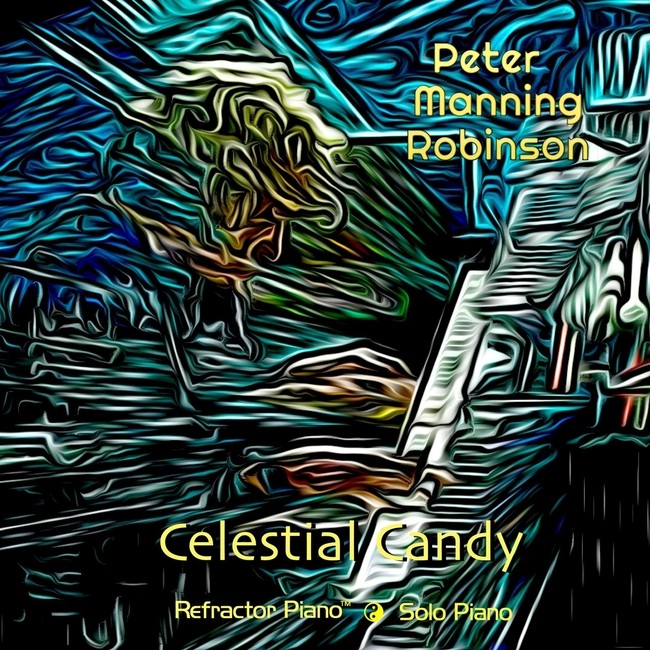 Peter Manning Robinson embraces an experimental tact to the solo piano through his creation called The Refractor Piano™ on the delightful dream world that is “Celestial Candy”. These songs possess truly unusual percussive elements to them, at times making the piano akin to that of a gamelan. Rather than focus on the soft side of the piano these hard metallic aspects further disorient the sound. At times falling into an absolute delirium, he makes sure that the sound has an unusual beauty to it. Moments recall some of Steve Reich’s mantra-like repetitions, the slow-moving evolutions that result in whole fully realized universes.

“An Hour On Earth” starts things off with true gusto. Within this sound the various chords cascade to create this living, breathing aural entity. Tension doubles down on the anxious and aptly named “Insomnia”. Melody and tempo become one on the hyperactivity of “Plateau Of Mirrors” with every various gesture getting magnified in unexpectedly clever ways. Here he splits the difference between the two as the sound oscillates between melody and pure rhythm. Done with a degree of soulfulness “Vanishing” plays it relatively straightforward. Quite minimal with a bit of a whispered hush “Obelisk” has a whispered quality.

“Celestial Candy” shows off Peter Manning Robinson’s uncanny ability to craft bouncing melodies that skitter about, in ways that have an intrinsic beauty to them.