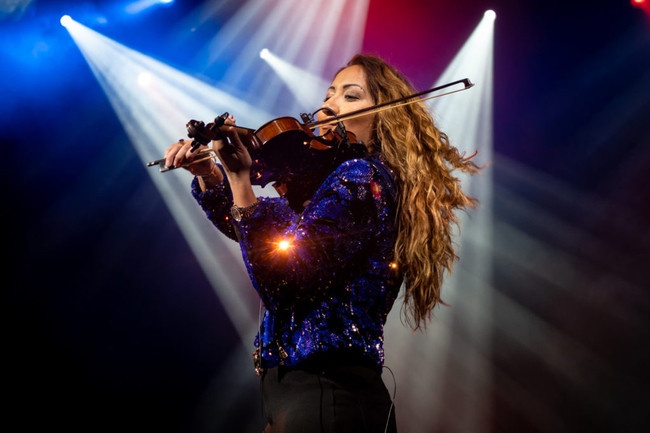 We get an early glimpse of what’s awaiting listeners on Bernadett’s release Redemption with its title song. It’s likely one of the crisper sounding songs included on Redemption and the assertive percussion sound gives the song the sort of urgency listeners usually flock to. It isn’t the driving factor determining the song’s success, however. Bernadett’s violin is, no doubt, the lead instrument throughout the entirety of the title cut.

Her playing wears many faces. Bernadett whips out electric lines attacking the listener with as much ease as she coaxes more graceful, even eloquent, counterparts from the strings. It’s a varied and lively performance. She never succumbs to overkill, however, and the song’s energies never overstep its design. It’s the sign of an experienced band leader, arranger, and overall performer.

That’s all the more impressive considering her youth. Bernadett, however, has already logged considerable time as a professional musician beginning at six years old. The love for performing, especially, didn’t take hold until early adolescence and has proven unshakable. She goes so far as to make a point of mentioning this in her press materials – the overriding desire to perform for appreciative audiences.

It’s a family trait. Bernadett carries on in the same general tradition as her grandfather, famed Hungarian composer and violinist Jozsef Suha. Despite falling out of favor during the era of Communist rule, Suha remains a respected figure in Eastern European music circles and beyond. Bernadett studied at the Music Academy in Graz, Austria and with respected musicians such as Silvia Marcovici.

You can hear this in the seamlessness of the title song. She ramps up the tempo here but deceives listeners with a bit of sleight of hand. The brief intro soon gives way to an uptempo romp driven by synthesizers, but it doesn’t mar the listening experience. It has a bright and streamlined color, blurring as it speeds past listeners, but Bernadett imposes order on the arrangement.

Her spectacular violin riffing once again never goes overboard. She dials the intensity up several notches, there’s no doubt of that, and fills the song with an undeniably fiery voice. It sounds like she’s playing for her life. It is not difficult to imagine either track, but this in particular, working well for a live audience. It is, in the end, an invigorating musical ride from first note to last.

It’s likely only the most recent step in a musical journey with many miles ahead. Most listeners will come away from hearing this release convinced Bernadett has something to say and will further evolve her sound with future outings. Everything’s in place for the future. The arrangements are far from placeholders for her soloing and she puts tremendous thought into everything she does.

Redemption begins a new chapter for this outstanding musician. The stakes will be higher from here out, the level of expectation higher with each new success, but something about the release’s title song says she is more than able to climb any mountain lurking ahead. Let’s accompany her on that musical and personal journey.