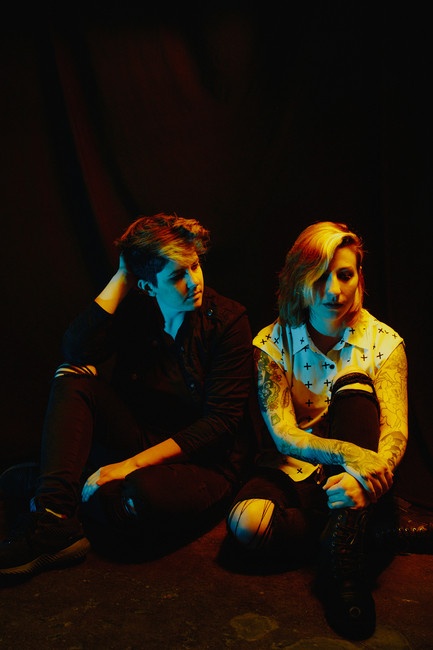 During the coronavirus quarantine in spring 2020, Kaylene and Lauren of the band Keys and Corridors decided to change their name to Goldthread. Reflecting on two years of writing hits from Akron, Ohio, the group felt they had outgrown their original band name, wanting to embrace a new chapter that better aligned with their empowering musical talents and accomplishments. Fans and followers welcomed this rebirth with open arms, and undoubtedly, the band has put it on display with their newest song, “Tiffany Skylight.” With a dark pop and alternative rock sound, Goldthread could be compared to the artistry expected of Coldplay and Paramore. Along with their moving female vocals and guitar-driven instrumentals, what makes Goldthread unique is their deep, creative storytelling flooded with truth and authenticity in each of their songs and videos.

“Tiffany Skylight” takes inspiration from a true story about a man so enthralled in a life of pretend grandeur and riches that he loses sight of what is truly important. He got caught up in money and status and couldn’t stand to lose it. Instead of facing his mistakes, instead of admitting his failure, he chose to kill his family. We wrote this song because, had he literally looked up, his problems could have been solved. In his own house, right above his empty ballroom, was a Tiffany Skylight worth more than the debts he had accrued. His solution was right in front of his eyes, and he couldn’t see it. In the end, the couple seems to be growing apart, but the irony is that all the man’s debts and resulting problems could vanish if he would put his materialism to rest.

Before the world began its months of isolation and adoption of what is now the new normal, Goldthread traveled to Chicago to film the music video for “Tiffany Skylight” inside the world’s largest Tiffany stained-glass dome. Now, viewers can finally take in the band’s brilliance and creativity in this musical and visual production. The masked dancers share pieces of the story in a way that can be understood without any words, performing the man’s infatuation and the fight taking place as the man continues to stray from his lover over money and prestige. Of course, viewers also get to enjoy fitting visuals of the couple dancing together under the breathtaking skylight, as repeated in the chorus. The shots of the band and its members give viewers glimpses of the heartfelt delivery of this piece of art.