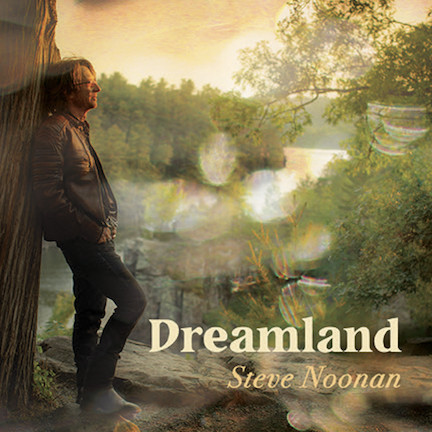 It’s been a while since we’ve had any music from Steve Noonan, yet after having the pleasure of listening to his upcoming album ‘Dreamland’ I can confirm it’s been worth the wait. With three albums under his belt, Steve Noonan has honed in on his unique brand of soft rock as he’s set to release his most fully realised work to date. His whole discography pulses with the post-modern British bands and ’70s songwriters that influence his immersive sonic universe. Yet, there’s an evolved air to Steve Noonan’s artistry in ‘Dreamland’, as if he’s sewn new sounds into the tapestry of his signature soft rock style.

‘Either Way’ kicks off the album with powerful energy. The punchy rhythmic structure has roots in the wider rock realms, yet Steve Noonan’s eclectic instrumental choices make the soundscape far richer. Piano motifs, sweeping synths and peppered percussion flow in and out of the sonic landscape, creating a somewhat pop feel that blends beautifully with the rockier roots. Throughout the whole album, this rich mix of textures involved makes for fascinating listening. In my opinion, there’s a real Jonathon Larson’s Rent vibe pulsing throughout the intricate melodies and carefully crafted cadences of each track; check out ‘My Words Will Reach You’ and ‘It’s All Gone Wrong’ and tell me I’m wrong! An absolute highlight from this album is Steve Noonan’s vocals themselves. With rapid melodies and intricate intervals, ‘One More Second Chance’ is an electrifying example of Steve Noonan’s vibrant vocals. I’m certain that Steve Noonan could silence a room with just his 12-string and stunning singing, yet Dreamland boasts some hearty band arrangements. ‘With You It’s Hard To Know’ boasts a beautifully built soundscape. There are subtle moments within Chris Furst’s intricate production that fills the space between Steve Noonan’s refrains. The perfectly panned taps that appear sporadically are utter ear candy; perhaps one of my favourite moments in the album. All of the thirteen tracks that make up ‘Dreamland’ boast immersive moments like this. Perhaps being a former recording engineer for Prince leaves with you a penchant for powerful production — yes, I’m serious. ‘Dreamland’ is an effortless evolution of his discography before him and will have you swimming in his dreamland of songs on its release on the 29th of this month.