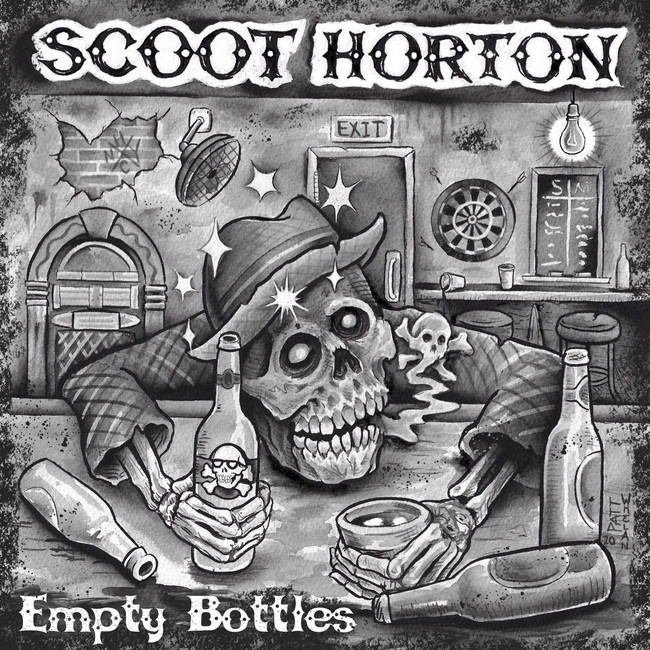 “Old punks don’t die, they go country.” This is the opening sentiment from Scoot Horton’s upcoming album ‘Empty Bottles’ and, well, he’s right. Much like the list of artists he rattles off in the opening single, Scoot Horton is a punk turned country enthusiast with a discography to match. It’s of no doubt that Scoot Horton is used to penning a punk hit, having toured both the U.S. and Europe with the punk band Shell Shock and founding the renowned New York punk band Awkward Thought. From his recent stuff, you wouldn’t guess the gentle country tones of Scoot’s vocals was such a powerhouse of punk. Yet, as Scoot says himself, “the spirit remains, punk [he’ll] always be”.

‘Empty Bottles’ sits at the crossroads of country and punk. There are chord changes that scream ’80s era punk and drum breaks that hark back to the Sex Pistols, yet there’s also the sweet simplicity of folk lyricism and melodies straight out of the west country. It’s an interesting combination that creates a defiant diversity within ‘Empty Bottles’. ‘Thank You’ is a prime example of this, as the accompaniment is driven by a classic hardcore chord rhythm, yet Scoot Horton’s vocal line sails over with a slick country style. The phrase ‘Cowpunk’ is thrown around in the album’s description, and I think that fits this song perfectly. ‘Bank Man’ is another stand-out. Built on true folk foundations, this track is fuelled by guitar chords and a bass line that has you bobbing along. Scoot Horton sounds superb. His gentle country twang could make the dullest of melodies come alive. So when the catchy melody of ‘Bank Man’ meets his tone it’s a match made in heaven. ‘Cannonball’ is a captivating change of pace in ‘Empty Bottles’. Elegant violin lines adorn the soundscape of acoustic guitar and bass. What is most striking about ‘Cannonball’ is the harmonies that haunt Scoot’s main vocal line. The melody is fairly repetitive, so the marrying of harmony and strings creates a colourful atmosphere that breathes new life into the soulful Americana sound that swims throughout the album. Once again, the diverse nature of ‘Empty Bottles’ is immense. Whilst it may be his only release since his 2015 album ‘Six 2 Seven’, ‘Empty Bottles’ has the feel of an artist coming into their own, allowing themselves to experiment and embrace the evolution of their sound. This old punk went country, and he did so with style.