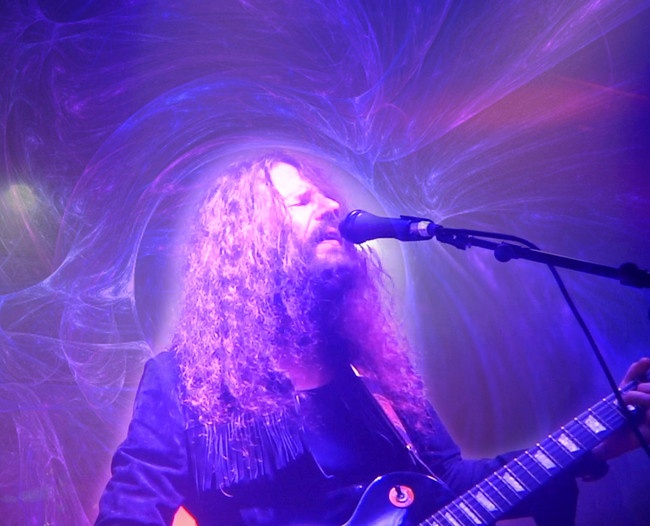 The global health crisis has been terrifying for everyone around the world. Some artists, however, have treated it as an opportunity to grow introspective, engage in scrupulous self-examination, and shed those trappings of modernity that get in the way of true expression. Some have lost themselves in gorgeous dreams. Others have built spectacular castles out of shattered projects, reimagined themselves, redoubled their resolve, and reached for new horizons. Andrew Reed’s radical retreat involved all of these things and more – and it happened a year before the pandemic began. The rock guitarist and songwriter unplugged from social media, focused on musical fundamentals — and fashioned a singular sound that suggests a profound personal transformation. Now, millions – billions, even! – have experienced a similar situation: like Reed, they’ve followed the Divine Wind and found Liberation.

But as deep as his new album is, it’s also immense fun: rock played for the pure thrill of it, with commercial considerations cast aside, re-energized and marvelously awake. Reed played everything but the drum parts on as a bird of the air himself, and that includes the scalding guitars, the rock-solid (but always melodic) bass, and the decorative synthesizers. The rock singer-songwriter has suffused everything in gleaming reverb and given it just enough distortion and fuzz to ensure it bites hard. The result ought to be counted among the most intoxicating and most adventurous sets of the pandemic era — a missive from a musical explorer who turned inward and found himself.

Much of Reeds music comes from his overcoming of truly catastrophic losses where he found himself searching for the “truth” about life…and to find out whether a person could actually live “as a bird of the air or lily of the field…”. “Twisted World” is a perfect example of the particular musical alchemy that Andrew Reed and his band The Liberation can generate. The track evokes both the party-hungry sound of ’80s rock radio and the meditative vibe of ’90s alternative music — and Reed sings it with the combination of joy, urgency, and nuance that he’s brought to all of his projects. Reed has long been known as a generous, marvelously exciting stage performer. “Twisted World” makes that energy palpable.

And if you can’t feel it in the mix, it’s certainly present in the song’s colorful, kinetic music video. Reed and his charismatic bandmates are captured in action, slamming the skins and soloing on their six-strings with enthusiasm that’s impossible to fake. These guys are true believers in rock, and that’s apparent in every shot they grace. But the “Twisted World” clip also channels the turbulence of the times. “Twisted World” – also Reed’s first major-label distributed release with InGrooves/UMG – came out of the pain and suffering from coming home to his apartment after working a double shift as waiter, only to find his belongings tossed outside and the door locked. It’s about the everyday frustrations and anxiety of the modern world, and was recorded by saturating analog tape running at three times the normal speed. The footage of the band is superimposed over shots that could have been taken directly from the nightly news: crowds and protests, unrest, and celebration. Even the concert shots are deliberately distressed and distorted to better reflect the destabilization that Andrew Reed means to communicate. This is rock made under pressure, a celebration for trying times, and a triumph of artistic self-determination and joy.