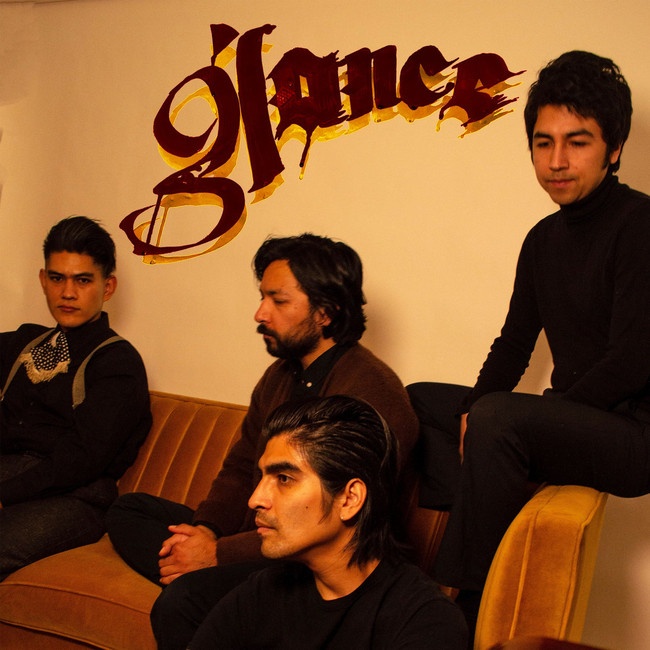 “Glance” is the dreamy new alt rock hit from Los Angeles’ rock outfit, The Tracks. Dripping with yearning lyrics and vocals that teeter-totter from residue marked glossy uber-focused imagery, to a foreground, omniscient observer. Rattled between the stanzas, and bridging the gap is a fierce guitar riff whipped into shape from the heavy lifting percussion. Equally present is a rhythm section attuned to maintain a modern groove. “Glance” is hard to ignore and it’s even juicier to digest.

While the natural melodic tones in lead singer Venancio Bermudiz’s vocals lay over the contradictory and often abruptness of guitarist Juan Santana’s shapes, they make for a textured sonic ride. Adding to the mix are the harnessed fills of drummer Jimmy Conde and the audacious (yet ever so subtle) throbbing bass lines courtesy of Felipe Contreras. “Glance” has an overall sheen of modern, concrete jungle pondering and eclectic rock fueled energy. As a listener I found myself sidecar to a driving, emotional pull. This isn’t a sweaty rock tune, no, it’s a tight, combustible nod to rock and roll’s raw leanings. One foot in the garage band grit, and one foot in the polished, with great depth production sweet-spot avenue, “Glance” feels too big of a soundscape to be boxed in.

“Glance” communicated to me a real sense of imagination and dreaming. The lyrics and magic that comes across is to love someone from afar. Wanting so badly to have one more chance, one closer look and bask in the beauty of it all. I also think this song could be about wanting to get one a peak at what is to come or find yourself tasting a bit of success and becoming addicted. You want one more chance, one more view at what could be the biggest thing to happen to you, yet you feel like the world is just passing you by. You want to stop and make it your own – grab it. As a band, I think there’s his underlying relentlessness in The Track’s synergy. They have this vibe that they are going places – even their band name suggests a way out, a direction. “Glance”, to me, encompasses the sound of youth finding their artistic pallet and running with it. I think there is such a wealth of colors and emotions running through the undercurrent. Isn’t that the point of rock and roll? To take the artist and the listener to unearthed places of the mind, to challenge the status quo and throw caution to the wind?

“Glance” has the makings to be a solid springboard for a band like The Tracks. I like their sound and the dissonance in the song is intriguing and wild. Even if I didn’t know they were from California, I couldn’t help but get pulled into thinking I was hearing a West Coast sound, a California rock tone. It’s not synth, and it’s not the same elbow grease rock you’d hear out of Flint, Michigan. “Glance” is from the upcoming album Paredón Blanco (named after a neighborhood in Los Angeles called Boyle Heights) and is produced by Lewis Pesacov (Foreign Born).