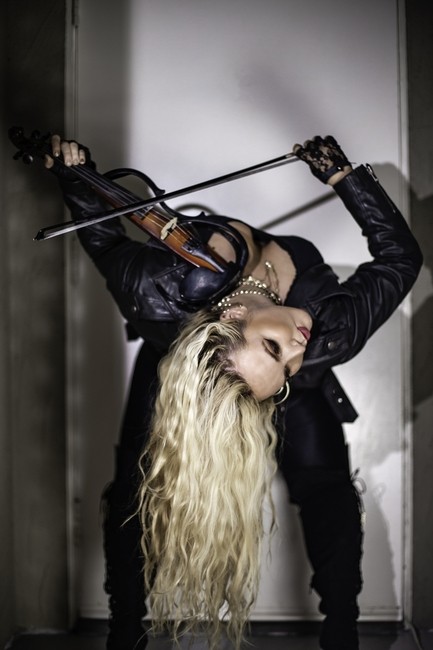 Wielding the violin bow as her weapon, Ginny Luke has entered the music scene ready to leave a bold impression. The singer, songwriter, and violinist has built up her reputation as a multi-talented creative in the music industry. From touring with Meat Loaf at the bright, young age of only 19 to trotting across the globe with legends like Britney Spears, Black Eyed Peas, and The Foo Fighters, she’s seen and done it all. Now, she’s shifting her career as a solo artist, allowing her charisma and powerhouse vocals to light the stage on fire. If there’s one thing Ginny Luke is going to do, she’s going to bring a memorable performance and leave a lasting impression.

In “Seductive Cinderella,” Ginny Luke goes all-out with powerful imagery and presents a character of female power and autonomy, using the metaphor of a witch to show female empowerment. Ginny’s character plays on themes from the original Brother’s Grimm tale of Cinderella, called Aschenputtel, as well as the Tim Burton film Dark Shadows. The video’s witchy aesthetic, ritualistic iconography, and rock and roll aesthetics are front and center, representing a challenge to classical music ideals as well as patriarchal narratives, as Ginny presents a statement of her sexuality and “cries out at midnight with a rebel yell”. The power and presence in her voice echoes to the deepest parts of your soul as she belts out lyrics of a night of lust, intoxication and revelry. Under the candlelight, we see Ginny Luke appearing to conjure up a wicked spell of romance and seduction. The cascading instrumentals spiral into an enchanting chorus with shots of Ginny Luke shredding on her violin in an electrifying performance. “Seductive Cinderella” fuses the blood-pumping energy of hard rock with the class and elegance of classical string instruments. The song captures what Ginny Lukes does best: blurring the lines between genres and formulating a masterful discography.