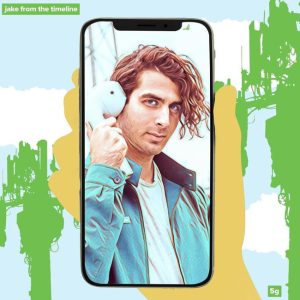 Comedian turned meta-pop artist jake from the timeline released a music video for the absurdly catchy synthetic single “5g” — directly to the timeline of Instagram, as one of his signature vertical music videos.

On ‘5g’, jake from the timeline gives voice to collective tech apprehension in our age of digital backlash, but this isn’t some cynical, above-it-all social commentary. Standing in for users everywhere, jake delivers pop songwriting, comic bon mots and manic, overdriven synth hooks to mark his spectacular ‘upgrade’ to the synthetic consciousness of 5g.

The music video for “5g”, which jake directed in his phone-vertical signature, is a shoutout to Verizon’s classic ‘can you hear me now?’ Test Man spots. Jake and his giant Airpod roam the post-industrial L.A. streetscape, just another piece of material dwarfed by opaque 5g towers cropping up everywhere.

The video feels like a piece of handmade digital art for the listener thrust into the forthcoming metaverse, turning fear and alienation into a sort of transcendent comic superpower. An absurd declaration of preparedness for our seemingly dystopic age, ‘5g’ assures us that it may be a brave new world, but we’ll get through it with our sense of humor intact.

“For better and for worse, our relationships are largely mediated by the internet,” jake said. “Some people are terrified by the way it’s influenced our world, some take on a kind of utopian attitude, and I can relate to both. To me, what’s important is to positivise that alienation and distortion, to make something constructive that expresses the value of playfulness and humor in a dangerously unsubtle environment.”

On an alternate timeline, jake from the timeline was Jake Fertig, a Mashable comedy director and performer who ‘saved drake’s life’ and started the ‘world’s youngest boy band’ until social media platforms shuttered editorial online video and his role along with it. Blurring the lines of reality and it’s digital twin, jake responded by posting banal instagram stories as performance art.

“I got the urge to start posting instagram stories that were increasingly dumb,” he said. “I’d post a video of myself talking about sitting in a chair, or recommending pasta to people visiting Italy. I had this idea that people would be scanning through their stories, the place that’s supposed to be saved for your ‘authentic’ behind-the-scenes self, and see something strange, someone who almost seemed to be performing. And I’d call myself jake from the timeline.”

Once a friend suggested he adopt the persona in his music, which was more private and confessional, he began to wonder: who better to make music about social media than someone who’s trajectory was altered by the course of digital progress?

“Ultimately, that’s what I make music for — real people like me who are trying to figure out how to live a good life in the age of the network.”