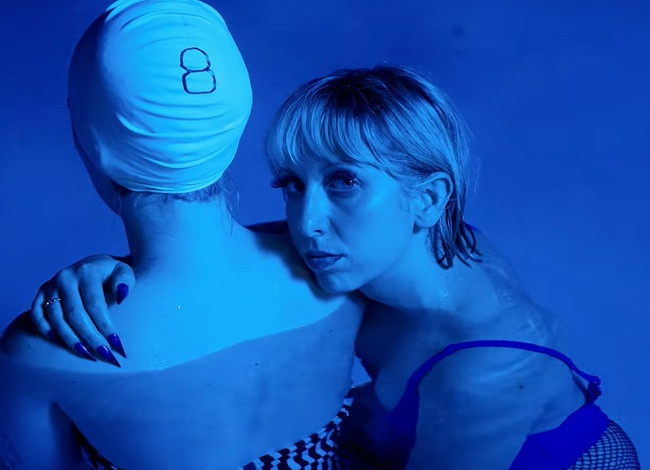 Synth pop outfit Babe Club’s new single “That Feeling” revolves around the duo of Jenna Desmond and Corey Campbell but boast a full-band sound. Campbell and Desmond initially met during their college years and began collaborating then. The pair later joined Americana influenced act Susto and this experience exposed their skills to a larger audience than ever before. They soon decided to form Babe City and “That Feeling” pursues a individual direction rather than relying on their past to carry them through. Despite the song’s subject matter, it’s a fresh and thoroughly invigorating track.

The backbeat draws you in from the outset. Babe Club achieves a tempered and relaxed mood for the entirety of the song, and it begins here. Corey Campbell’s production makes sure the song has an authoritative and steady pulse. It never overpowers the other instruments, however. Anyone expecting bombast from Babe Club’s brand of synth pop will be disappointed or, perhaps, relieved.

They keep their sonic range relatively narrow. Campbell and Desmond apply delicate synthesizer touches throughout the cut filling the song with color. There’s a strong visual sense underlying this single – colors seem to radiate from various passages throughout the song. Other instruments such as bass further flesh out the track. The piano playing is especially lovely. The arrangement has a gossamer-like quality; a tepid breeze could perhaps blow it away.

Yet it sticks with you. The near-crystalline texture of the song testifies to the songwriting talents driving Babe Club’s music. Desmond and Campbell co-wrote the track with Joshua Hogan and Andy Warren, but an unified voice emerges from this recording. Desmond’s voice delivers the song’s lyrics with deep emotion. She never lays it on too thick, though, and the measured phrasing she brings to the song gives the listening experience much more wallop.

The accompanying video matches the track well. Directed by Desmond and MEG HA, the evocative atmospherics aren’t shallow window-dressing. There’s obvious symbolic significance with several images throughout the video; their meaning may be lost on some listeners. It is professionally polished eye-candy, however, that compliments the song and breaks with traditional promotional clips.

Babe Club hasn’t been together very long and the high profile they’ve attained in a short amount of time illustrates their gifts. It’s a crowded music world out there with more and more acts “fighting” for an increasingly smaller slice of the pie. Babe Club stands out for the best reasons – they bring equal parts style, panache, and substance to their songs and listeners are responding.

“That Feeling” will provoke a greater response. Desmond and Campbell are creatively simpatico in a way few duos are. It seems like they possess, as well, the acumen to align themselves with other musicians attuned to their goals. This latest single will speak to listeners, as well, who’ve endured over eighteen months of a pandemic with no end in sight without ever sounding strident.

It’s a welcome pop confection and rates as one of 2021’s best singles. Expect to hear much more from Babe Club in coming years.