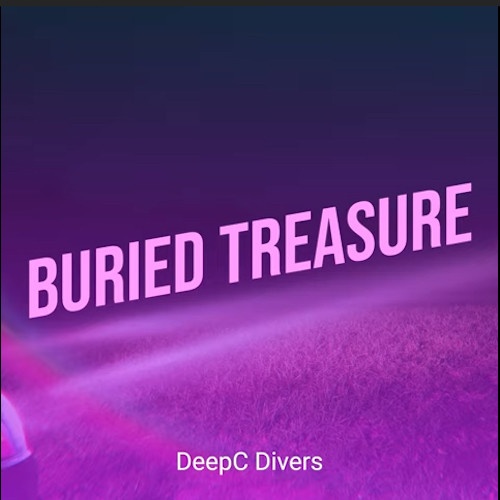 Maybe we just watched too many pirate movies as kids, but the prospect of finding buried treasure (as a child), is probably equivalent to winning the lottery as an adult. Yes, it’ a big dream, but if you’re going to dream, you might as well dream big, right? Deep C Divers sing about those who dream such dreams with its single, “Buried Treasure.”

The track opens with a driving electric guitar groove, before the vocal enters, enticingly, with the line, “I want to make you an offer.” However, even before this vocal takes over, there’s an electric guitar part that may remind you of Blue Oyster Cult. That lead vocalist is Deep Chinappa, who sings with a David Bowie-like authority. The act’s lead guitarist is Paul Erlich, and he adds lively electric guitar parts throughout this driving, emotive track.

Along the way, Chinappa tells us how buried treasure’s never going to last. If we believe any material possession is going to carry us through to the end our lives, we are sadly mistaken. Just consider all the tragic stories about people that win the lottery and then proceed to lose it all and end up worse off than before they won. Such manufactured blessings can oftentimes be deceptive. It can be very much like a Twilight Zone episode. You may think you know what you want, and you may believe that once you finally obtain what you want, you will want no more. However, if and when you get it, you may also get a whole lot more than what you ever bargained for. Your ‘prize’ may just come with a bevy of negative consequences. Like when people become wealthy, only to learn they just don’t have the wisdom and/or discipline to handle such wealth. As difficult as this may be for some folks to fathom, it’s likely true that many of us don’t strike it rich because sudden wealth might also spell our doom. It’s like that Garth Brooks song, where he expresses thankfulness for unanswered prayers. Call it the universe or god or whatever you want, but there just may be an overseer looking out for all of us. That all-seeing one might not give us what we wish (and let’s be honest) lust for because it/he/she knows best.

Rather than hoping to find buried treasure (or any sort of found wealth), perhaps we ought to ask for contentment concerning what we already have. Deep C Divers seems to understand this truth. Yes, we’d all love to find buried treasure, but it’s usually not something we truly need. Instead, pray or imagine all our needs are met. That’s not too much, nor too much to ask.

Even if you don’t care to dig too deeply into the meaning of Deep C Divers’ “Buried Treasure,” you’ll enjoy the passionate rock this track creates. It features classic rock elements but applies these to an intensity found in the punk, new wave and post-punk movements. In fact, finding a great rock & roll track like this one is akin to discovering submerged booty. It’s a much safer and a more fulfilling manner of solving a mystery than losing one’s moral compass over a pirate’s windfall, that’s for darn sure.