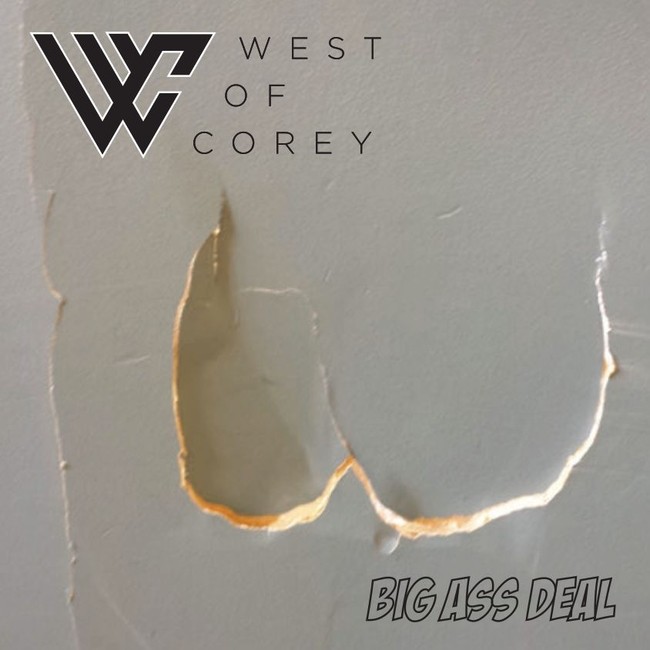 West of Corey’s three-song EP, Big Ass Deal, opens with a power ballad titled “All Alone.” Like everything on this project, the song combines scratchy, soulful lead vocals, with guitar-heavy rock & roll. It’s both classic rock and contemporary, at the same time.

The album’s default title track is titled “Big Deal.” It’s only missing the “Ass” in the project’s title. The song’s lyrics speak about a cigar smoking, prideful guy. We’ve all seen them; especially in the music business. Whomever this guy is, he’s obviously a selfish bastard. He only cares about himself and wouldn’t even consider helping someone in need. “How can you be such a big deal?” its chorus asks. It begins quietly, before the main electric guitar riff enters the mix, which then leads to the lead vocal, which also speaks about thousand dollars suits, in addition to the smoking of a big cigar. Sadly, humility can be almost non-existent in some circles. This is especially true when a person in charge works with a bunch of yes men (and yes women, for that matter), that are required to build up the ego of a ‘big deal,’ in addition to doing their jobs. It makes the workplace toxic and complicated. There are some people that are big deals, just by the nature of their position. However, West of Corey is telling us about a boss that loves his/her power just a little too much. When someone puts their position over everything else, that’s a dangerous thing.

“Tears On My Sleeve,” in contrast, is quite different. It’s a quiet song, where the electric guitars are strummed relatively gently, rather than cranked out as bar chord riffs. Simultaneously, the vocal is sad and soft. When someone has tears on their sleeve, this is crying that just cannot be avoided. It’s almost like a child that wipes tears (as well as his/her mouth) all over a sleeve. In this case, though, it’s an adult unable to hold back tears. That wet sleeve gives away an emotional state – tears that cannot be hidden.

Opener, “All Alone,” opens with acoustic piano, before electric guitar enters the mix. Like the character crying on sleeves, this song narrator is suffering through successive sleepless nights. When couples have spent a lot of time together, the act of sleeping alone can be one of the most difficult tasks. We just get used to having that lover right next to us at night. The phrase ‘all alone,’ however speaks of more than separation from a lover; furthermore, this person comes off as friendless, too.

Each of these tracks is powerful and effective in its own way. Few instruments express extreme emotions better than electric guitar and a raw, rough-edged lead vocal. West Of Corey incorporate both of these special elements to give listeners a short, but emotional journey. Indeed, West Of Corey show signs of becoming that big ass deal one day. Great rock music like this, however, is always a big deal. A big ass deal, if you will. Listen to this one at full volume, always.