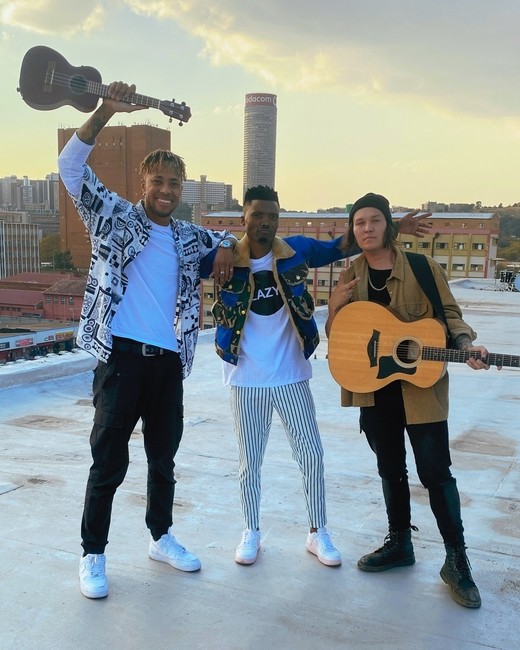 When the artist at number one is a world-class talent, there’s never any shame in being number two. That’s especially true if you’re number two in a faraway place that you’ve never visited. This is the exact situation that the members of the Juno Award-winning Halifax, Canada alternative pop duo Neon Dreams found themselves in: “Life Without Fantasies,” their radiant 2019 single, became a smash hit in South Africa on the strength of its irresistible melody and its energetic performance. Singer Frank Kadillac and multi-instrumentalist Adrian Morris got right on a plane, played a series of sold-out shows, secured a platinum designation for “Fantasies,” and became legitimate stars on the other side of the globe. But they couldn’t leapfrog past Mthandazo Gatya, the man who held the top spot for weeks with the sensational Ubuntu anthem “Senzeni.” So they did the next best thing: they joined forces.

“Say It Out Loud,” the heartfelt new single from Neon Dreams, combines two of modern pop’s most remarkable voices. Here’s Kadillac, effortless and electrifying, hopeful, bright and beautiful, and Gatya, soulful and direct, pained and impassioned, equal parts beautiful and wounded, singing together in an international dialogue designed to resonate with everybody who believes in self-expression. Their performances are perfectly complementary — they sound like they’ve been singing together for a lifetime, which, in a way, they have. They’ve worked on different projects, and there’s an ocean between them, but they’re aflame with the same desire to communicate, the same optimism, the same hope for a better future.

Adrian Morris has matched these two performances to music of uncommon grace and drive. As they always do, Neon Dreams sounds big, but never imposingly so: their glories are always on a human scale. Kyle White captures the duo in action in Johannesburg, where they perform on a rooftop with the South African city’s unmistakable skyline behind them. When they’re joined by Gatya midway through the track, the video takes a turn — what once felt introspective and near-prayerful suddenly becomes a party. The chemistry between these musicians is unmistakable, and their relationship is its own special effect. This is Gatya’s town, but he’s a welcome host, and he recognizes Kadillac and Morris as the fellow travelers they are. They’re all searching for the same thing: music beyond borders, beyond genres, expression without restrictions, life and love without fetters.