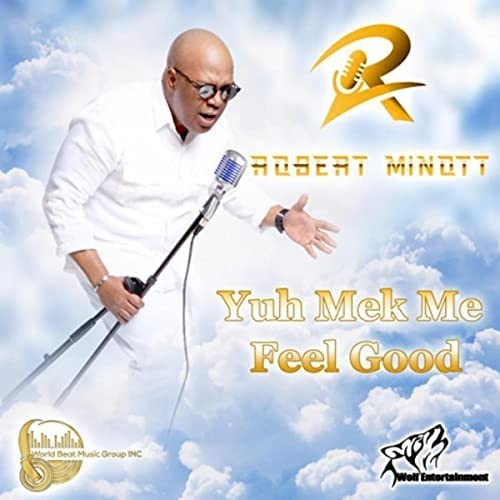 Instrumentally speaking, you could say that the new single from Robert Minott, “Feel Good,” has all the standard trappings one might expect out of a funkified reggae track. The beat is big, the vocals sweeping, and the rhythm connective in every department that matters, but I don’t know that the arrangement of instrumentation quite qualifies as predictable by any measurement.

There’s a serious effort on the part of Minott to step away from mainstream conventions in this piece but without sticking himself right into the middle of an aimless movement towards left-field experimentation that neither has a future nor a cohesive present to reference here. From the moment we press the play button onward, it’s more than a little evident that we’re listening to someone who isn’t as interested in trends as he is intrigued with the exponential development of his genre, and while he’s pushing the aesthetical envelope as much as he can, he’s stopping well short of going off the edge. I don’t know that this is something I would be able to say for the bulk of his peers at the moment, but hey, that’s why we’re talking about “Yuh Mek Me Feel Good” as much as we are this season.

Minott’s lead vocal has a curious place in this arrangement, neither owning the spotlight nor feeling like it’s stacked in with the backdrop and yet it’s always sharp enough to cut into whatever instrumental foundation we’re being presented with. The swing of the percussion would have covered the chills factor amazingly well on its own, but when it’s pressed against the singing as much as it is in this mix, there’s just that much more catharsis spilling out of the lyrics and into the fabric of the instrumentation our singer is straddling with such confidence.

The bass is a bit brash for my taste, but the swagger Robert Minott has in this performance is sufficient for offsetting such a component rather handily. The melodies here are effectively more conservative than they ever had to be, but this too makes sense if highlighting intricacy over indulgence was the goal this player had from day one (and, for all intents and purposes, that’s clear listening to “Yuh Mek Me Feel Good”).

A surgically precise execution is one of the best features Robert Minott has going for him as a professional at the moment, and when he’s using it to bring a vivid lyric to life for us in the manner he does for this performance, it’s difficult to understand why he hasn’t already exploded onto the mainstream as many others have in the past year. He’s a new face to me and a lot of other listeners just getting back into this next wave of reggae, but despite his status as a relative unknown to some, he’s acting like a full-blown superstar in this single and making a name for himself in the right circles for sure. He’s going to have my stamp of approval in the future, and “Yuh Mek Me Feel Good” is the main reason why.

The music of Robert Minott has been heard all over the world in partnership with the radio plugging services offered by Musik and Film Radio Promotions Division.  Learn more https://musikandfilm.com