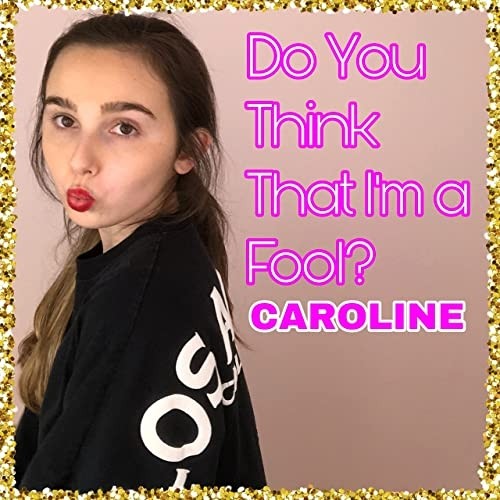 caroline, and her new single “Do You Think That I’m A Fool?” exude adolescent charm and relatability. While the meaning of the song seems a little ambiguous, caroline wrote it about her struggle with mental health and anorexia, telling her inner voices to stop breaking her down. The track is meant to be empowering and uplifting. It definitely has an upbeat sound and a super catchy chorus. It sounds like something that could already be on the radio or someone’s driving playlist. caroline’s voice is sweet yet strong, and you can tell that she’s putting her all into her vocals.

To produce “Do You Think I’m A Fool?” caroline collaborated with BMI producer and songwriter Dan Brook, who has worked with Britney Spears, Selena Gomez, Demi Lovato, and others. This is probably partially responsible for how polished the track sounds, although it’s caroline’s vocal talent that really sells it. The music video, however, looks like someone filmed and edited it on an old phone. It’s a weird juxtaposition, but it almost makes caroline more endearing. Due to the nature of the song, allowing herself to be filmed and putting it out for the world to see is a huge step. People who struggle with body issues often feel way too uncomfortable to show themselves off. I think it makes her seem more human and less like another plastic toy from the Pop Star machine. It also makes her even more relatable to girls her own age who also might be suffering from similar problems; a “See? You can do it too!” kind of thing.

caroline hopes that her songs make people feel hopeful and included, and she wants everyone to “feel the sass of not caring what others think” in “Do You Think That I’m A Fool?” The track certainly feels sassy, and I think it’ll appeal a lot to teens as they go back to school after a strange year off. Everyone loves a song that tells them “hey, it’s totally cool to be yourself.” There’s nothing quite like the feeling of being connected to a song emotionally, feeling like the singer actually gets what you’re going through. caroline telling her inner demons and her haters that she doesn’t care what they think of her is something people of all ages could relate to as well, not just teens.

caroline has already been gaining some online attention with her song from last year “Already There.” Between Tik Tok and Spotify, caroline’s fanbase is growing day by day. It would seem she’s poised to make a breakthrough. Granted there’s millions of artists waiting to make it big, but caroline has an incredible voice and has an appealing vulnerability. She comes off as an artist that fans would find easy to connect with, which is half the battle. “Do You Think That I’m A Fool?” is fresh and fun, as well as deep and engaging. It can be interpreted in a bunch of different ways depending on who hears it, a hallmark of a great pop song.