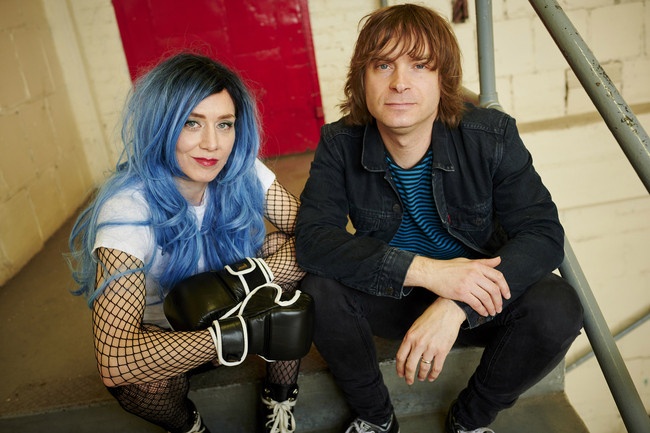 Some musical duos were destined to be together and destined for greatness – like Ryan And Pony. Ryan And Pony is the newest project from indie rockers Ryan Smith and Kathie Hixon-Smith, but these rock and rollers have been in and out of the Twin Cities music scene for quite some time. Ryan is a non-stop workaholic and has been playing guitar for the incredible Soul Asylum since 2016. Pony (Kathie) is a colorful artist who grew up with deaf parents. Their paths crossed while touring the country as the indie rocker backup band for Mark Mallman.

Known for crossing genres and mixing sounds, Ryan And Pony are back at it again in their new single “Start Making Sense,” a seamless combination of dreamy pop and indie rock. The guitar riffs are strong and powerful, while the vocals remain soft and breathless. “Start Making Sense” was inspired by The Talking Heads’ song “Stop Making Sense.” It’s also pulling from the wild spreading of fake information and people’s willingness to believe it. The second track off their latest album Moshi Moshi follows the dream-pop, post-punk, and Brit-rock sound of the rest of the album. It’ll make you dance but also make you think, and no other musicians can do that quite like Ryan And Pony.

The video for “Start Making Sense” is the perfect visual for this rad song. It starts with a zoomed-in shot of Ryan and Pony’s hands as they strum their guitars. As it continues, we see different visuals that act as backdrops and overlays for the group. Some are as simple as a ticking clock, and others show protests and picket signs. Ryan and Pony’s faces are morphed into the ever changing background as they sing. In between, we see the dynamic duo giving a killer performance.