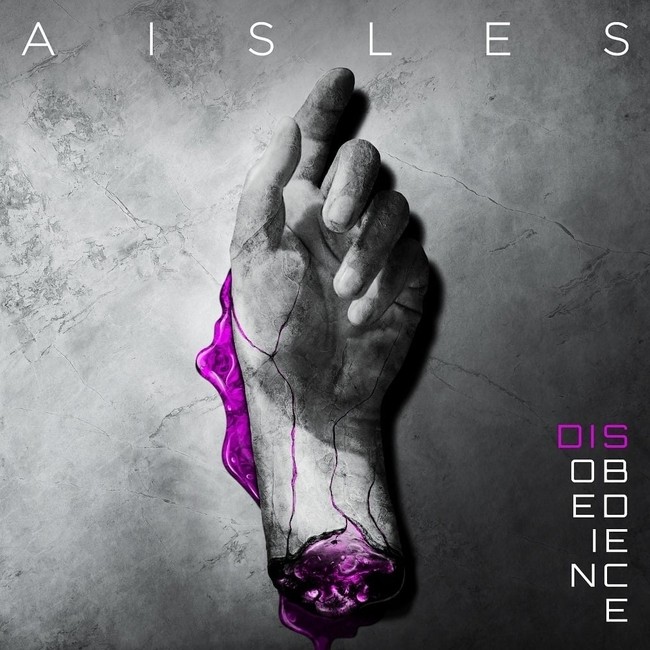 With energy akin to the wall-shattering overtones of John Carpenter’s “They Live”, Aisles has struck gold with their latest single “Disobedience”. Serving as an appetizer of sorts leading into their hotly anticipated fifth album, the group finds themselves honed and more focused than ever before. Shockingly for a group of veterans at this point, this song is an exciting entry point for those unfamiliar with the post-modern punk sensibilities the group is offering.

There certainly is an almost “wall of sound” approach to the track that begins with a near minute-long opening guitar solo that jolts your system like a needle full of adrenaline. There’s a strong push and pull quality to the song where it starts loud and abrasive and then almost subverts it by leaning into softer qualities that expose the true yearning and passion underneath the posturing punk sounds as evident by the more “vapor-wave”, early 2000’s almost PlayStation aesthetic that immediately follows the guitar. It’s very refreshing and seemingly experimental, but when you stop and think about it I can’t imagine any more complimentary styles than what they begin with.

Admittedly, it should be stated up front that this is a mammoth of a track, something that might intimidate new listeners, but the band has an incredible knack for pacing, that the song brisks by with such high energy, you’d be hard-pressed to even think about its runtime. There’s an inspired sense of escalation that’s present throughout the whole song. Israel Gil, the lead singer, has this almost flamboyant performance, grounded by the lyrical content and his willingness to get deeply intimate. With sexual overtones early on with lines like “Deep inside we find a world that’s wet and warm/let’s climax in abrasion”, those words take on a completely different context in the back end, as Gil’s passionate pleas for longing and adoration become almost devastating, In lesser hands, this could have very much become the kind of “let’s piss off our parents” rock that permeated the 90s and early 2000s, but luckily the track is more self-aware than that.

A big shoutout must be directed to the mixer of this track, Randy Meril, who’s no stranger to this type of stuff with his work on acts like Muse, Liam Gallagher, and surprisingly Paul McCartney. In a time where music for a generation seems to be slowing down, looking inward and in a state of wallowing self-examination, Aisles takes those concepts and cranks it up to eleven. Sometimes the chorus can be a little too wordy for its own good, and Gil sounds exhausted at points trying to catch up to the admittedly inspired word choices, but it’s not anything too distracting.

At the end of the day, “Disobedience” is a freedom anthem, aimed at the powers that be and their failings of the people and an entire generation. I can imagine an older crowd maybe not vibing with it, and maybe it may alienate some young people, but those opened minded and angry enough will find a deep catharsis in this rally cry.