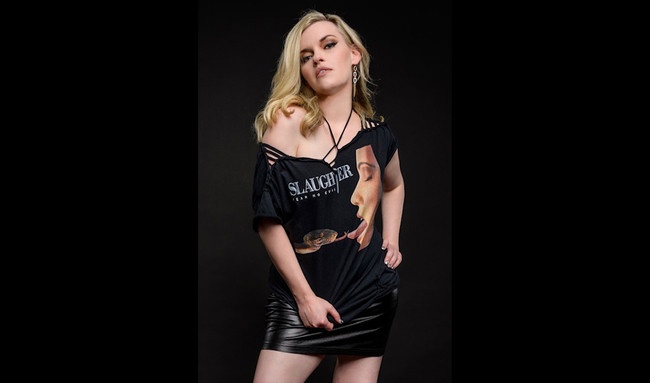 It’s been thirty years since Nirvana and the alternative revolution put an end to the era of swaggering glam metal. Or did it? In retrospect, it’s easy to see that the spirit of pre-alternative metal never went anywhere. It continues to enliven rock, pop, and other styles that hadn’t been invented yet at the time of its ascendancy. It’s even easier to see that the rock bands that followed didn’t differ all that much from their metal forerunners. They believed in the expressive power of the overdriven six-string. They put their absolute faith in the audacity of a full-throated, wholly embodied vocal performance. And they loved a big, slamming beat.

It’s no secret that celebrated voice actor Kari Wahlgren is a student of ’80s and ’90s metal: her upcoming album is a re-imagining of songs from throughout Slaughter’s dynamic, wonderfully menacing, impossibly loud catalog. Slaughter’s music is a perfect union of artistry and attitude, and Wahlgren demonstrates that she’s got both qualities to spare. But her interpretations of Slaughter tracks also display a deep awareness of the musical trends of the past few decades. Traces of industrial music, buzzsaw garage rock, dangerously splintered metal subgenres, and even a little polished pop and jazz are audible in her version of Slaughter’s catalog.

Take “Mad About You,” her latest single, and one that she’s paired with a playfully murderous video. Slaughter’s original was a piledriver: a relentless song that gave the lie to the oft-repeated claim that commercially successful metal was soft. Wahlgren’s take on the song is gleefully unsparing, aided by a blistering guitar lead by Nikki Stringfield from The Iron Maidens, the all-female hard rock band who’ve opened for KISS. They’ve slowed the tempo down to make everything grind harder; they’ve dialed up the distortion; and they’ve squeezed every ounce of grit and menace out of a song that was already pretty filthy.

The SlaughtHER project grew out of Wahlgren’s stage show of the same name – a live tribute to Slaughter and a radical reinterpretation of the glam-metal band’s catalog. The “Mad About You” clip is an extension of the SlaughtHER show, and Kari Wahlgren plays her role to the hilt. Fellow voice actor and viral video maker Ben Giroux captures her as a demented Alice in a dangerous Wonderland, mixing up a homebrew that she’ll later feed to a captive man. In between those sequences, she takes center stage and snarls as Nikki Stringfield squalls away beside her. She looks every bit the part of the ferocious, hyperkinetic, slightly frightening rock and roll frontperson. Her heroes in Slaughter couldn’t have done it any better.