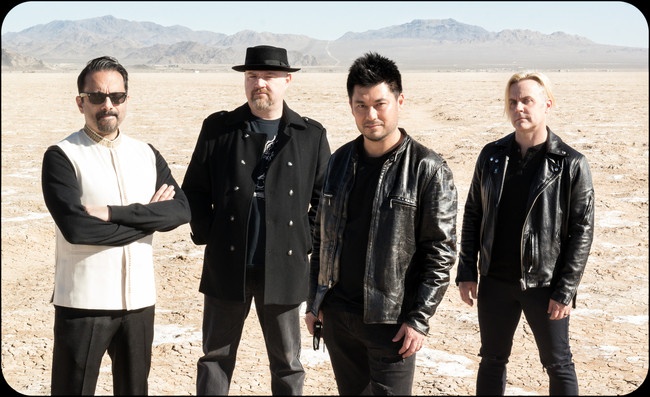 A woman charges across the desert on a horse. She’s riding expertly, but a little wildly and dangerously, too – she’s pursued by something, but we don’t know what it is. Around her ankle is a loop of rope that once tethered her to a stake driven into the parched soil. She’s snapped her restraint, and she’s fleeing for her life.

This is the metaphor at the center of the beautifully shot new video for “American Canyon,” the latest single from The Jenny Thing. The Berkeley, California band knows all about conflict, drama, and daring escapes. Their music is full of cinematic gestures – evocative soundscapes, anthemic choruses, racing-heartbeat rhythms, and poetic lyrics from singer Matt Easton. Jenny Thing compositions are heady, and their arrangements are intricate: expect interlocking, richly textured guitar parts, layers of synthesizer and electronics, and haunting support vocals. But no matter how artfully their songs are decorated, they never fail to rock.

The ecstatic “American Canyon” sounds like the work of a group reborn – because it is. The Jenny Thing reunited in 2016 after a hiatus that lasted nearly two decades. Instead of re-creating the sound that made them a favorite in the Bay Area underground in the 1990s, they’ve fully embraced modern technology. The retooled group integrates elements of industrial, experimental, ambient, and electronic music into their latest recordings. With all four original members aboard, The Jenny Thing in 2021 is still recognizable as the band that rocked houses with the Gin Blossoms, The Untouchables, and Juliana Hatfield. But American Canyon, their upcoming set, blazes a new path forward for the band — and, perhaps, for rock music in general.

Ramesh Nicolas Iyer’s starkly gorgeous video for “American Canyon” captures the band in performance, but not on stage: they’re roaring in the midst of a California wasteland. The scene reflects the emotional state of the woman on the charger, freed from bondage but chased by furies. At first, it takes the shape of a great black dog, running as fast as the horse, tailing her with a proprietary gleam in its eye. Then, it becomes clear that the dog is a figure for a man, driving a truck, determined to bring her back under his control. She’s running from a relationship — possibly an abusive one, but certainly a dangerous one. Her speed is impressive and motivated by terror. But only when she faces her adversary head-on is she truly able to give him the slip.