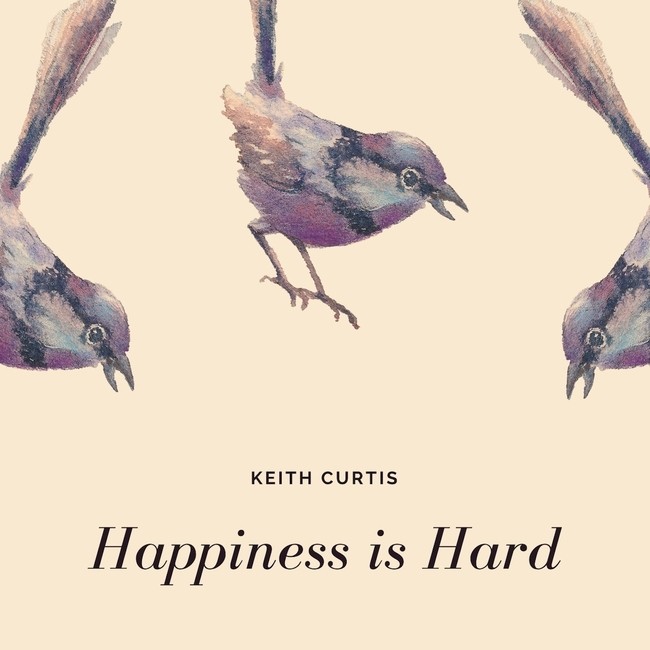 There are some debut records that are so perfectly realised, that you can tell it’s a result of a lifetime of experience living and breathing music. That is most definitely the case for Keith Curtis’ debut album ‘Happiness is Hard’. The Minneapolis based singer-songwriter has been honing his craft for over ten years and only now is he treating us to his unique blend of blues, Americana and indie-folk that swim through the three tracks that make up the album — and what a treat it is.

‘Taking Off And Landing’ eases us into the trilogy. Reminiscent of the Grammy-winning ‘Raising Sand,’ this track has its roots firmly planted in the acoustic landscape. What is so striking about the stunning sonic universe Keith Curtis has created is the gentle guitar riffs. They intertwine effortlessly, blending and binding beautifully throughout the track. Matt Guertin’s production is incredible in this one, as they spread out throughout the space of the mix; ‘Taking Off And Landing’ is a completely consuming listen. Next is ‘Real Good Love,’ my utter favourite off this album. Keith Curtis has fused the fundamentals of blues and Americana together and has sculpted a real moody atmosphere, which bursts into captivating optimism in the choruses. Keith Curtis’ vocals are outstanding throughout as he shows off his powerful performance prowess that is reminiscent of Americana stars before him, yet still feels like a totally fresh force in the scene. ‘Calculate’ concludes this divine debut, and does so with style, grace and an ethereal air that leaves you hanging on a string hoping for more. Kenny Wilson’s pedal steel transports this track to a whole new level; the acoustic ballad becomes a sonic experience swimming in luscious sweeping notions, at its core lying the true Americana soul. This core theme is the wind in the sails carrying us through the journey of ‘Happiness is Hard’. Whilst the title statement is most certainly true, you’ll still be likely to feel a wave of happiness, just as I did when sitting back and putting this stunning debut album on a slow summers evening this month.

Listen to ‘Happiness is Hard; on SPOTIFY NOW