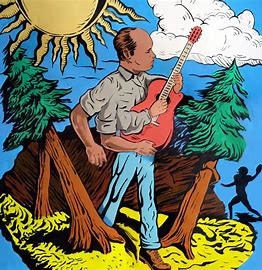 Andrew Neil’s album title track, “Sunny Side,” borrows its chorus from a great old Carter Family song. That classic song encouraged a focus on the positive. Yes, there are rain clouds in life, and it rains. However, if all you think about is how much you hate cold weather, you’ll never leave enough time to appreciate all those lovely warm days. Andrew Neil has had a difficult life, which has included time spent in a jail and a mental institution. If anybody has a right to sing the lowdown blues, it is he. But he doesn’t, though. Instead, these ten songs are almost all glass half full songs, filled with joyful celebration.

Sonically, this is a severely stripped-down recording. To these ears, it’s sometimes like a less punk/folk Billy Bragg because – like Bragg – Neil builds all his songs around his unique guitar style. Neil taught himself how to play guitar, so the chords he plays are all of his own creation. With that said, though, these melodies sound straight forward and familiar. As a singer, Neil is not any smooth operator. Instead, his singing throughout is a little rough around the edges. He’s ragged, but he’s right.

In addition to spreading positivity, Neil also gets a little spiritual places. One called “Heaven,” is an obvious song about the afterlife. It’s clearly the work of a believer in the spiritual realm. “It’s not above/It’s not below/It’s in your heart,” he sings. To Neil’s way of thinking, ‘heaven’ is a way of life. It’s not so much a physical place, as it is a state of the heart. The album closes with a relatively obvious praise song titled “Thank The Lord.” Also, “One Big Family” suggests a kind of universal family, a family wherein everybody belongs.

While this is a mostly guitar album, “Anymore” adds one wrinkle of an acoustic piano. However, piano is only out front in the mix in a few places on it, for coloring, one imagines.

Andrew Neil has been labeled an outsider artist, which is a strange and slightly vague categorization. It’s a little bit like when they started terming edgier music ‘alternative music.’ It was more about what it wasn’t, than what it was. Nevertheless, Neil is a bit of an outsider, in that he goes to the beat of his own drum (albeit, without drums on his actual recordings). He’s also an outsider because his music is primitive and pure, and in the most delightful ways. It’s almost as though the music he makes has been untouched by modern production techniques. It’s coming straight from his heart, without any contemporary coloring muddying it up along the way.

You might also say Neil’s music has a childlike quality to it. It’s kind of like the Ramones, in that once they perfected a musical formula, they basically stuck with it throughout their career. Similarly, Neil’s music is built upon his own, distinctive formula, and ends up sounding like nobody else. Sunny Side offers the necessary reminder to stay positive. Staying on the sunny side is a choice, just as walking in darkness is willfully chosen. Nobody forces anyone to walk in darkness. Instead, one has to chose to walk where the light shines brightest, which is the right choice. That wise choice is what Andrew Neil does with his music.