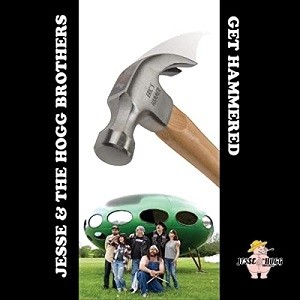 Steady and strong, the guitar strings echo an unpolished sound as patriotic as the red, white and blue on our flag in Jesse & The Hogg Brothers’ gruff “America,” and while the instrumental edge in this track is endearing to the honest cowpunk in all of us, it produces but half of the charisma the song will embrace listeners with this May. Alongside the other twelve tracks on the band’s new album Get Hammered, “America” sees Jesse & The Hogg Brothers getting back to the business of doing what they’ve been doing for years now in making some of the purest cowpunk around (and rejecting the parameters of the label every single chance they get).

“Santa’s Got a Bag of Coal” quickly drifts into Tom Waits-style avant-garde rock before ripping us through a bluesy verse structure as hypnotic as the menacing strut of “She’s Done Gone to the Gittin’ Place” is. “Wait a Minute” howls at the moon as heartily as “Onion Ring” does, and whether these players are beefing up for a sonic brawl or mercilessly making fun of country balladry in a way only its most loyal student could they always sound like they’re cultivating a very special connection with the music and each other.

“Hogg Tail Twist” is a beat-focused swing anthem that doesn’t try to indulge in any department, which somehow makes it the beacon of efficiency so many alternative country albums I’ve listened to in 2021 have been missing. “Biker Ann” – which feels like a whiskey-stained celebration of lust somehow drawn from the same place Green Pajamas’ “Sister Ann” once was – is definitely the fiercest song on the first half of the LP, but it doesn’t take anything away from the stormy harmonies of “Love Buckets” or the bludgeon of the beats in “Texas Hammer” later on in the record. There’s a nice, even flow to the content here that has made it hard for me to turn away from the tracklist once I’ve gotten started with it, and if you’re looking for the right kind of soundtrack to take you through the American southwest on limited gas money and the occasional stop through a high-adrenaline cantina, there should be no other album you consider this spring outside of Get Hammered.

From the relatively black and white “The Hammer” to the rockabilly-influenced grind of “Cream Gravy” and suffocating harmonies of “Black & Blue” and the more volatile “We’re All in This Together,” Jesse & The Hogg Brothers’ Get Hammered is a fun album to get lost in (and with, depending on the circumstances), and I think other cowpunk enthusiasts are going to share my sentiments. Fans of the genre both old and new alike will enjoy the unfanciful cut of the mix from one song to the song, and curious music critic types aren’t likely to have any issues with the compositional inventiveness this group of players come up with rather unstoppably. All in all, this is one stinger of an indie rock record I don’t imagine forgetting anytime soon.