Flippin’ Gothic Fabp is back with another banger-fuelled body of work. To date, Flippin’ Gothic Fabp has twenty-eight albums and eighteen singles filling up his Spotify feed, and is continuing his captivating musical journey with his latest album ‘Platinumism Playlist’. His style feels totally free form, reflecting a stream of conscious like essence to his sound as his lyricism stays rooted in his experience, navigating his life and offering insight into the world around him. Flippin’ Gothic Fabp has an evident natural affinity to music – his extensive discography can testify to his ever evolving sound and immense unfolding ideas – yet Platinumism Playlist has the feel of an artist coming into their own, honing in on their craft and delving into the deep tones that drives their sound. 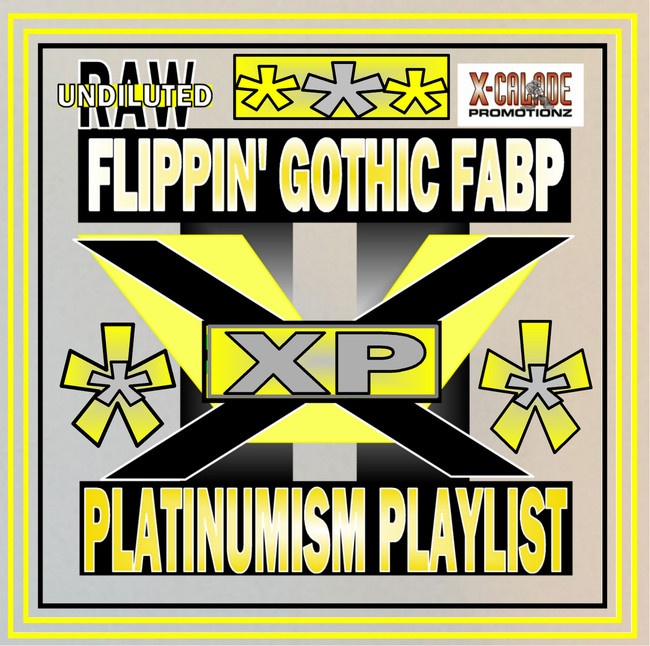 ‘Platinumism Playlist’ is kicked off with the smooth intro ‘Chillin @ The Park Intro’. Setting the slightly ominous tone of the album as a whole, Flippin’ Gothic Fabp eases us into the powerful production that reigns in this album with gradually glitching vocals, ominous synth lines and subtle percussion. Flippin’ Gothic Fabp makes it clear his production company X-Calade Productions are on top – this becomes increasingly apparent listening through the artistry throughout the album. ‘Boyz-N-Galz Fo Sho’ switches the vibes up as Flippin’ Gothic Fabp’s more vibrant vocals are married with intricate backing vocalisations. His free flowing style is made all the more interesting in this track with the unravelling echo repeating his truths. ‘Puohduop Duop’ is another stand out of ‘Platinumism Playlist’ as his authentic vocal performance stands front and centre. Electric energy bursts through your speakers as this beat boasts the most energetic soundscape of the album. Showing the vibrant versatility of his artistry, Flippin’ Gothic Fabp shows his darker side in ‘The Baisley Pone Pree’. A haunting guitar hook interjects his bars, whilst panned vocal delays melt into the speakers and create a depth and ominous flair to the track. To conclude this diversely dynamic album, ‘I’m Not Smoking’ rounds off ‘Platinumism Playlist’ with a more laid back feel. Flippin’ Gothic Fabp curates a completely catchy hook whilst a hypnotically repetitive organ serenades below. He leaves us with a wonderfully human moment, showing the lighthearted nature of him as an artist that makes him so captivating. Running at around sixty minutes, ‘Platinumism Playlist’ is a feat of lyrical expression and is oozing the flair that makes listening to Flippin’ Gothic Fabp so worthwhile.