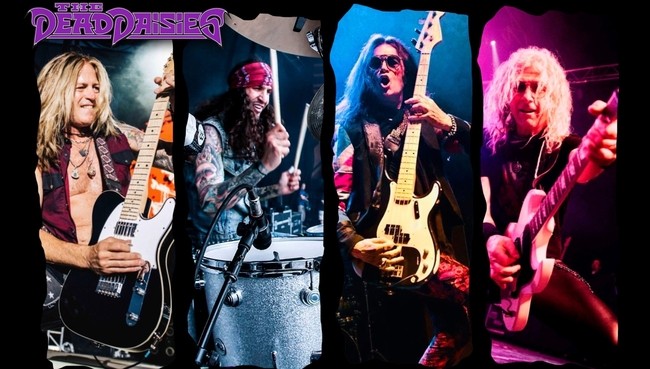 Individually, the members of The Dead Daisies are all high-ranking artists and veterans in the music industry. The current roster of the supercharged group features guitarist Doug Aldrich (Whitesnake, Dio), drummer Tommy Clufetos (Black Sabbath, Ozzy Osbourne, Alice Cooper), bassist and singer Glenn Hughes (Deep Purple, Black Country Communion), and rhythm guitarist David Lowy (Red Phoenix, Mink). But together? They’re a force to be reckoned with. Undefeated and vigorous, the four-piece are doing their part to bring back rock and roll. Influenced by the 70s and 80s, they take after legends like Aerosmith, Bad Company, and Foreigner, their high-voltage rock songs incorporate modern trends, creating timeless music. We ask, and they deliver. They’ve topped charts and received plenty of airplay, and with their latest album, Holy Ground, The Dead Daisies present eleven infectious and thunderous tracks. Rock is undoubtedly here to stay.

There’s no such thing as restraint when it comes to a Daisies release. With every song and visual, they unleash a beast that’s been electrifying their guitars and charging their microphones. Expect a fierce storyline alongside palpable characters and a raging track as a minimum from the all-star band, and more often than not, they raise hellfire for free on the side. “Like No Other” is a sequel to the past clip “Bustle And Flow” starring the main protagonist (aka a mischievous heroine) named Daisy. She also commands the new “Daisys Revenge” mobile game where players face challenges in Daisyland and The Dead Daisies soundtrack the app. Created using Epic Games’ Unreal Engine (Fortnite), the band is one of the first to claim the intersection where rock music meets gaming.

Described best by Ultimate Classic Rock, “Like No Other” “features thunderous grooves, beefy guitar riffs, a wah-drenched solo, and Hughes’ signature bluesy howl.” Daisy is on the run, and her face is plastered all over the ominous tech city with big “WANTED” letters above. Yet she’s untouchable and destroys everything that even attempts to take her down. Daisy, just like the band, cannot be restrained because being inhibited is not an option.