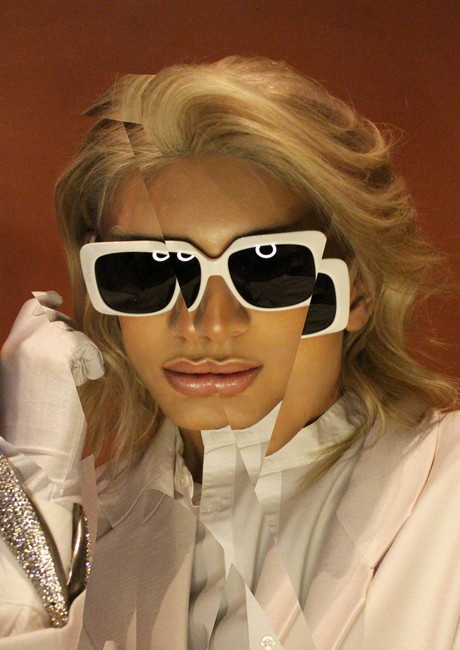 French Fries and Margarita is an enigma. But they’re pricking up ears left, right and all over the place with their non-gender-, non-genre-, non-sexuality-conforming schtick, which is our kind of schtick. Also, don’t ask their age. ‘Timeless’ is the answer, which is our fault for asking really. As for the name… LOVING, much?

Thing is, with French Fries and Margarita, we get what we’re given and the rest is kind of up to us. Superstar blonde hair, oversized showbiz glasses, fashion-forward, a bit Marilyn Monroe, a bit Marilyn, a bit Warhol, a bit Jackie O, a whole load of whole load.

And if we can be a bit serious for a moment, there is a reason for this. ‘I want to establish a style that people recognise before we go further. But the reason I’m not revealing my identity is it could be dangerous in some countries.’ And French Fries and Margarita’s first song is the inspired Crimes Against Nature. ‘It’s a legal term from the 19th and 20th centuries used to allege that same-sex activity or any sexual activity that was mainstream was a crime against nature, punishable even by death.’ And, coming from a former music teacher and classically trained pianist, it’s unique, mature, knowing. The video is also a tour de force, with cameos from ‘The Pope’ and ‘The Donald’, even ‘The Queen’. Which makes for an impactful, punchy, political and very fabulous debut.

As for the name? ‘I love French fries and I love Margaritas so it’s part of my life. I’d go to clubs and watch beautiful hot guys and girls while sipping my Margarita and eating my French Fries in the corner.’ But you can call them Francesco if you like.