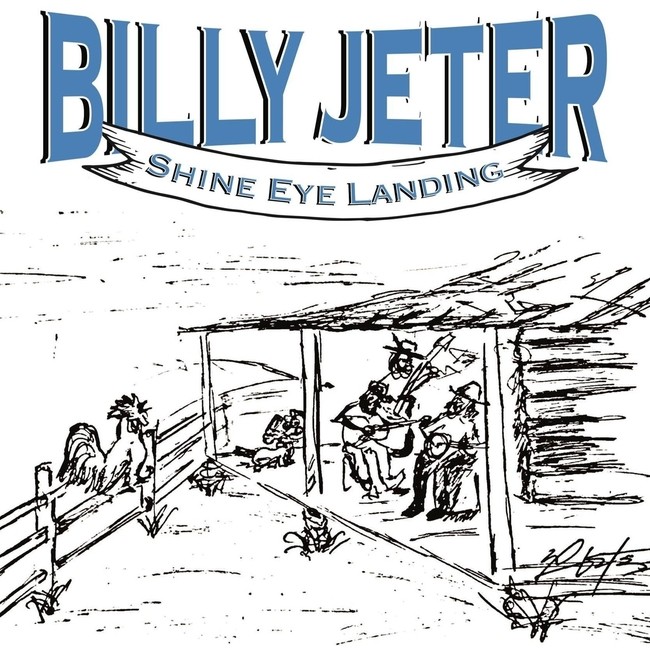 Billy Jeter’s new album Shine Eye Landing is as finely crafted as any musical release I’ve heard in recent memory and brimming with emotion. The album’s ten songs are rife with blues, folk, and country influences without ever seeming beholden to any particular instrumental voice. A large reason for this is Jeter himself. Though backing singers often accompany him during the course of Shine Eye Landing, it is his voice and words that sustain this collection from beginning to end. There is, natch, a deeply personal quality about these songs, but Jeter has mastered the rare talent of making the personal universal and there’s nary a track included on this album adult listeners will not relate to.

Even the more “writerly” moments, like the first track “Orion”, are adorned with a genuinely communicative spirit. Jeter relies on a bit of symbolism here to convey his message, but the song remains open to interpretation rather than spelling things out for listeners. The electric guitar has a memorable growl throughout well suited for the track’s blues=drenched language. He changes things up with the second song “Shine Eye Landing”. The album’s title song strips the musical backing down to evocative theatricality, but you never feel like he’s gone too far. The lyrical content is just as sparse and Jeter’s songwriting, alongside his musical collaborators, juxtaposes these critical songwriting components well. The balance never sounds off-putting.

“Sins of Me” will be a highlight for lots of fans. I’m captivated by how stripped bare Jeter seems to be here; few understand the sort of bravery, or foolishness depending on your point of view, it demands of a performer to expose themselves in such a way. It resonates, however, and will touch many listeners without ever seeming maudlin. “Highwater Blues” is the last unadulterated nod in the Mississippi Delta’s direction and Jeter makes it count. The song feels wet, drowning in corn whiskey and torrential downpour, but I believe the high water in Jeter’s writing is more metaphorical than the real life events old bluesmen often used as a jumping off point for their songs. Regardless, it hits home like few others on this release.

“Spider Lilly” is a gem tucked away late in the album but deserves repeated hearings. The stylish manner Jeter employs on the country-tinged cuts will stick with fans of the form long after the final note fades. For my money, this is the best song of its kind on Shine Eye Landing. “Song for Walter” may have the album’s finest lyrics and even a single listen will have you coming back for more. The same lean economy we hear in Jeter’s music finds its way into his words as well and the recurring backing vocals underline their quality for listeners. “Oh Lordy Me” is another country-tinged winner. Ending the release with these smooth numbers doesn’t upset the balance Jeter achieves during Shine Eye Landing and has an effect reminiscent of a leaf gently wafting to the ground. It’s a lovely experience and Jeter’s talents should be appreciated in these increasingly fractious times.