Italian workhorse of a producer and songwriter Gabriele Saro graves us (again) with a pair of exciting unconventional party anthems in the form of “Breathing” and “GANGSTA”. For some context, Saro is kind of a force of nature when it comes to music, having a major background in music work for film and has done plenty for both documentaries and commercials and has won multiple competitions, and oh, he’s only written a merger 900 songs. 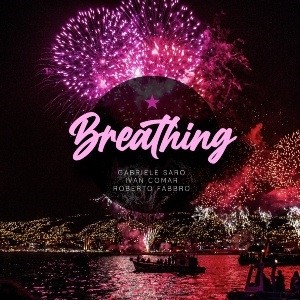 As I said, the man is unstoppable who shows no signs of slowing down, and why would he? His quality is just as good as his quantity and in these two singles, he gets a chance to flex his more Pop Radio friendly mindset. “Breathing” with male vocals and also created and produced by Ivan Comar and Roberto Fabbro (who also helped work on the follow-up single “GANGSTA”, but more on that later) are just electrifying and a much-needed dose of ambient positivity in this rough musical landscape. Singing from the POV of a guy recently coming under the realization that he wants to feel love, make money, and do what he wants, which might sound like a reductive summary, but the final result is a lot more inspired than I make it out to seem. The production on this track is just mint, and you can definitely hear someone playing this during an intimate moment with a loved one.

In ways, it’s about finding the right person to share these moments of love and success with, but often we get too clouded by things that don’t matter which is an apt representation of not just 2020 but the world at large right now. Saro definitely has an ear for catchy hooks and this is no exception and his imagery is deeply heartfelt and cerebral that he implements into the work. “GANGSTA” follows a very like-minded approach but has this refreshing almost feminist take thanks to the inclusion of being told from the POV of a woman, a dancer who “doesn’t wanna be a Gangsta”. It’s a very tongue-in-cheek track, one that doesn’t take itself too seriously but has a thoughtful message it wants to convey. I found myself coming back to these tracks because every time I did I noticed a little production addition or a line I may have glossed over initially since some of the lyrics are a little on the unconventional side.

They’re deeply emotional products and they wear their hearts firmly on their sleeves and make you want to hear more out of this group’s pairing. There’s something about both of these songs that just sounds effortless, like not that they’re just spat out with no thought, but that these songs sound like they’re crafted from someone who has the work ethic of a machine, but the soul of a man which can’t be said for a lot of Pop music today. Hopefully, this won’t be the last we hear of Saro this year because he’s got more life to breathe into these fantastic tracks.

The music of Gabriele Saro has been heard all over the world in partnership with the radio plugging services offered by Musik and Film Radio Promotions Division.  Learn more https://musikandfilm.com