It’s strange how much humans are obsessed with angels. Heck, they even named a major league baseball team after one of these mystical beings. When a woman is described as being especially beautiful, she’s called ‘angelic’. Oddly enough, though, whenever the Bible mentioned angels, these were always males, never females. And you rarely, if never, hear of men being described as angelic, even though the only angels we know about from the texts are male. Strange. Similarly, mermaids are also only described as being female. There are legends of how these beautiful creatures beckoned sailors with their siren songs, and then left them shipwrecked. They’re never men, these mer-beings. Maybe because that just wouldn’t be nearly as sexy. 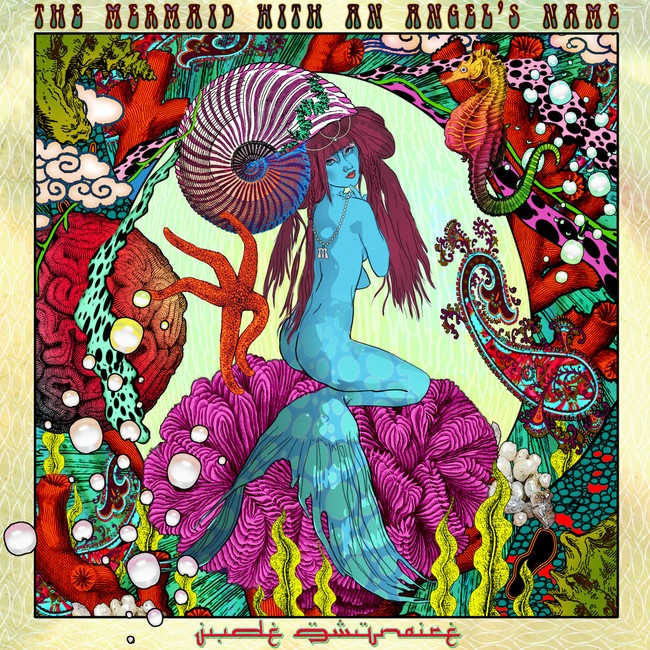 Jude Gwynaire’s latest single, “The Mermaid With An Angel’s Name”, mixes these two intriguing beings into one enticing song title. Spotting a mermaid is adventure enough for most average folks. Meeting one with an angel’s name, however, ups the ante significantly. This title suggests an encounter that goes deeper than just seeing a mermaid; rather, it hints at an actual conversation with a mermaid. That’s almost too good to be true, for anyone that fantasizes about such mermaid meet-ups.

Sonically, this track is a jangly guitar placed over subtle keyboard backing. Since it is decidedly a guitar piece, the first guitarist that came to mind while listening to it was Johnny Marr. Marr, who is now a solo artist, got his start as the instrumental mastermind of The Smiths. He also went on to add his extensive guitar skills to recordings by Talking Heads and Modest Mouse. While much of The Smiths’ music retained a T. Rex-like muscular stomp, there was also a gentler side to the group’s music. Marr had a great way of creating auditory intimacy with the way he played guitar on The Smiths’ quieter songs.

“The Mermaid With An Angel’s Name” sounds like two guitars tracked together. These guitar sounds create a beguiling sound. It’s as though Gwynaire has attempted to put this mermaid meeting into the language of music. Perhaps words wouldn’t even do this unusual encounter justice.

Of course, modern wise guys like us don’t believe in mermaids, unicorns or any other type of fantasy figure. Nevertheless, it’s not a bad thing to use our imaginations to conjure up mental pictures of what, say, a mermaid might look like and act like. Imagination is what oftentimes moves society from a bad place to a better place. Before life conditions improve, we must first be able to picture our world in a better light. Sadly, it’s mostly only children that welcome vivid imaginings of things like mermaids. Adults are just too worldly wise to waste time on such pursuits.

With “The Mermaid With An Angel’s Name”, Jude Gwynaire has given us a soundtrack where we can let our imaginations run wild. Yes, you have permission to let this music create a mental meeting with a mermaid. Nobody will tell on you. Music is like a blank page, where creators of it can make up the world as they go along. This is yet another instance where Gwynaire takes his listeners on an imaginative journey.