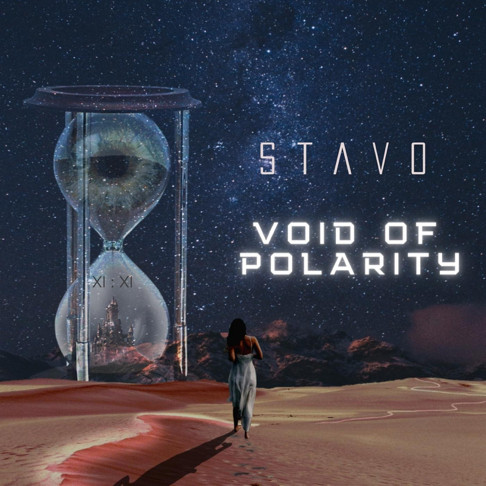 Void of Polarity XI:XI, the newest album from the band STAVO begins with an ominous distorted voice growling words of sleep before an eloquent and thoughtful piano takes over leading to a soaring electric guitar crashing down. This in a way is one of the best thesis’ to describe the album. It’s about a musical world of harmony and mystery and the extended four-minute intro (“Disciplined Dreams”) sets the stage of what’s to come with this almost roller coaster feeling of sounds that sound one part Rush but almost with the mix of an adventurous video game, a call to arms. You cannot just be passive in this listening experience, you must be active and that’s reflected in the text of the album too, following the story of a girl named Indigo.

You might know an Indigo in your life, or maybe you’re an Indigo and haven’t been able to relate to these feelings until now. She’s wide-eyed as heard in the track “Change the World”, a power ballad that feels almost like a song from a broadway show where she knows she’s got things inside her worth bringing out, but nothing truly prepared her for the life she lives now and how sometimes it’s downright disappointing it is. We get a better sense of who she is in her almost inner monologue track “Indigo Child” with even lyrics like “Story left untold, my imagination taking hold and beaming through my soul”. She cites how in her dreams she flies, but as we know dreams aren’t always indicative of reality. She knows she’s met for more.

Later she is spoken to by the luminous Council of Light which feels like they stepped out of something from 2001 A Space Oddysey with the elemental wailing that follows in the background. There’s a foreign presence they bring and it’s actually more amplified with their second appearance with its addition of almost mechanical alien vocal adjustments. It’s elements like these that elevate this from your more standard indie-rock fare. They’re really trying to convey a message and they’re willing to go above and beyond to get their point across and truthfully after such a difficult year, the feeling of casting off the shackles of unhappiness to live life on your own terms will resonate with listeners and break through to your hearts with every harmony and beat.

This album is also beautifully mixed and mastered and while I think it can absolutely be enjoyed by playing out loud, the way I best enjoyed this album was listening with headphones in bed, in a dark room. It’s an experience and with the lack of distraction you might encounter with this method, pieces of it will only stick with you harder than if you’d consume it some other way. STAVO should be incredibly proud of this album that they’ve gifted us, and while I think it might be a little too dense to draw in your average “mainstream” music-goer, for those looking for something different, this is it.