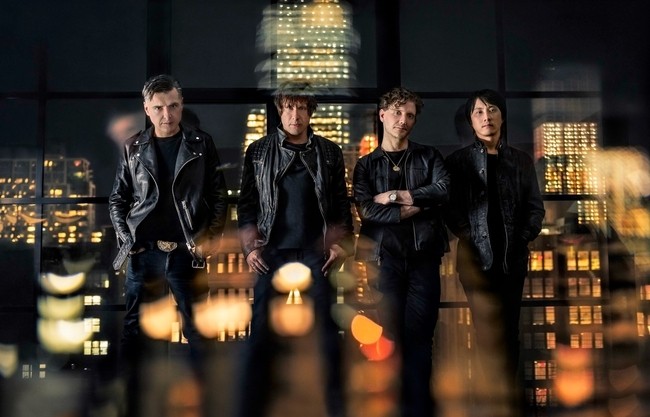 An angelic young boy rides his bicycle on a deserted country road. His face is innocent, and the forest is verdant – but there’s something deeply sinister about it all nevertheless. When the boy ditches the bicycle by the side of the road and dashes into the thick forest, the moment is so sudden and deliberate that it’s downright uncanny how natural it seems. The angry sky, the shadowed forest, the sense of absolute purpose with which the boy moves – it all portends serious and supernatural trouble looming on the horizon.

And that’s just the opening scene of “Natalie,” the newest video from New York City rock band Camera2, which was shot on location in the deep woods of rural Pennsylvania. From there, the mystery only deepens – right up to a twist ending that you would never expect. The gorgeous video is the perfect match for a song that oozes with intrigue: “Natalie” is a fever-dream of hushed vocals, beguiling synthesizers and treated guitars, hypnotic beats, and a vocal sample on the choruses that sounds very much like a rhythmic exhalation of breath. Even without a video drenched in black magic, a song like this can prompt some seriously altered states.

If this sounds like an incantation – a ward against the darkness – there’s a very good reason for that. Camera2 is fronted by multi-instrumentalist and songwriter Andy Chase, founder of one of the best and most innovative pop groups to emerge from New York City in the past thirty years. Alongside his close friend and frequent collaborator Adam Schlesinger, Chase formed the critically acclaimed band Ivy in the mid-1990s. Chase and Schlesinger toured the world together, opened Stratosphere Sound recording studio together, and supported each other’s projects for years. Like so many others, Chase was blindsided by Schlesinger’s sudden death in the early days of the pandemic. “Natalie” is the first track released by Camera2 since Schlesinger’s passing, and it’s fair to say that the shadow of loss looms over the entire song.

Yet as haunted as it is, “Natalie” radiates resiliency, too. The band, which contains members of Stellastarr* and Teddybears, is strong and built to last, and the delicious melody of “Natalie” is likely to linger in your head long after the music stops. Andy Chase has never had a shortage of musical ideas, and “Natalie” demonstrates that even after years of producing, recording and playing with such artists as Tahiti80 and Juliana Hatfield, he’s just hitting his stride now. And if the “Natalie” clip suggests that he’s got trouble on his mind – well, don’t you?