Inspired by a famous Scottish sea cave, Jude Gwynaire’s new instrumental single is comprised of two instrumental parts – both guitars. Gwynaire has said the track is intended to evoke sadness and dreaminess, among other emotions. It is pretty music and, yes, it’s quite dreamy. 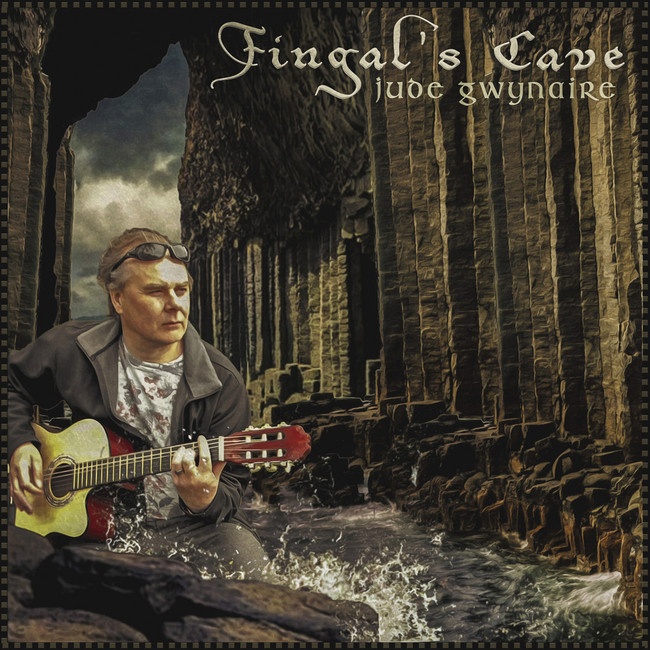 Many of Gwynaire’s compositions are inspired by nature and nature’s beauty. Nature is oftentimes music for the eyes, as well as the ears. It’s beautiful, without really having to try. It just is because it is. Sea caves are fascinating because caves, all by themselves, are intriguing. However, when you mix in water with deep, dark cave dwellings, this locale become something entirely different.

Gwynaire isn’t the first artist to be inspired by this natural structure. Mendelssohn visited it in 1829 and wrote an overture influenced by it. Author Jules Verne mentions it in his novels Journey to the Center of the Earth and The Mysterious Island. Poets have also found it enthralling, including William Wordsworth, Lord Tennyson, and John Keats. More recently, one of Pink Floyd’s early songs has this location’s name. It was also an instrumental, written for the film Zabriskie Point, but never used in that film.

“Fingal’s Cave” will most likely get categorized as folk music. It’s all guitar, no drums or even bass. It is gentle and flowing, like waves coming in and going out. Gwynaire also bends some of the lead notes he plays on it, which gives the recording just a small hint of the blues. It has a meditative quality to it, too. It’s easy, as a listener, to just get lost in it and lose all track of time. This is like how one feels whenever awed by nature. When one is struck by nature’s beauty, it’s as though the rest of the world disappears for an indeterminate period of time. Or as if time itself is momentarily suspended.

Much like a cave, Gwynaire’s composition is deep and mysterious. It’s good fun for the listener to just explore its depths and wonder about its creation. This piece’s melody just keeps circling out, like rings created by throwing a pebble in a lake. It’s not purposeful, like a typical song. Purposeful songs have a beginning, middle (perhaps a bridge) and an ending. Not Gwynaire’s work. This one could have just gone on and on, reaching out wider and wider.

Had Gwynaire decided to add bass and drums to this mix, it could have easily developed into a psychedelic workout. Psychedelic sounds are oftentimes such internal music. After all, much of it is inspired by what happens in the minds of psychedelic drug users. It is, simply put, many times an attempt to express musically, what the musician is feeling deep inside. This track is the same thing, only its creator sounds like he’s high on nature. Yes, that sounds a little corny. Most of us can attest to feeling this way, so admit it. Most of us, though, aren’t skilled musicians like Gwynaire.

Oh, to be exploring a Scottish sea cave, instead of dealing with everyday stress. Maybe this delightful music will provide a few minutes of escape from everyday life.