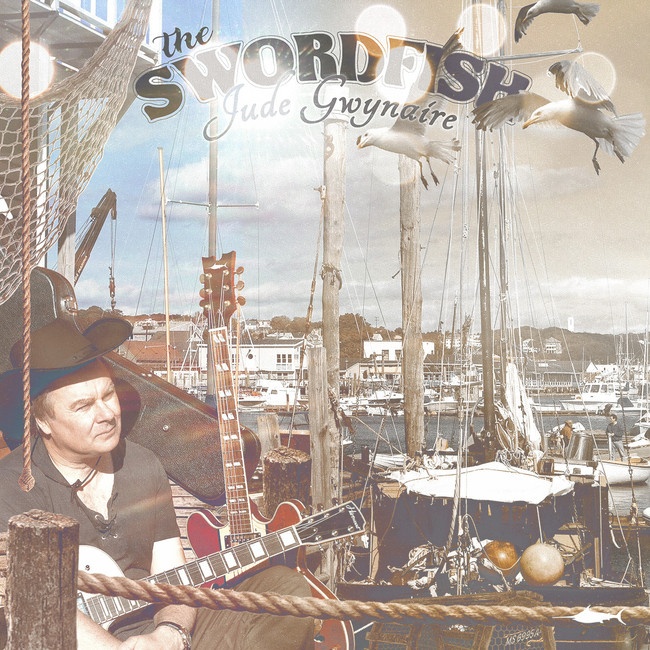 Jude Gwynaire’s “The Swordfish” begins with a cool little electric guitar intro. Its style incorporates a lot of different genres. It has folk and country in it, but because it also features electric guitar, one can also hear rock & roll running through it. If you’re a Velvet Underground fan, you may (like me) hear a melody that reminds you of other VU riffs.

There’s also an overall gentleness to this music. The track’s video pictures the composer holding an electric guitar sitting seaside. Perhaps this is music inspired by being so near the ocean. The fingerpicking rolls a little bit like the way waves roll in and out. The sea is calming, with a rhythm that is consistent and sure. Likewise, this music is equally measured. It’s unrushed and unhurried, much like the ocean. The ocean sets its own pace and is unaffected and unruffled by whatever happens on land. Similarly, this music sounds to inhabit its own universe. It has a timeless quality. The instrumental feels like it could have been written four days ago, or forty years ago. Once again, when you look out on the ocean, it looks exactly the same as it did decades ago. It is relatively unchanging. So too is this piece of music.

Stylistically, this track really doesn’t sound like a contemporary recording. It plays out as though genres like rap and punk rock never happened. Those that enjoy Nick Drake’s music may also like this single. Granted, there is no singing on this work, the way Drake’s wispy voice is so essential to his songs. However, the playing is meditative in a way Drake’s music can strike one as being. This guitar music to intended to create a certain mystical mood. It’s not fast picking, that shows off the way Nashville cats do it. It’s also not the sort of screaming stuff so often found among the metal crowd. In contrast, this is sweet and soft, and may also remind you of the sorts of sounds produced by Windom Hill Records, back in the day when New Age music was a thing.

Then there’s the song’s title, “The Swordfish.” It’s quite the unusual creature, being from an environment where there sure are plenty of unusual creatures. Described as a predatory fish, with long, flat, pointed bills, these fish look exactly how they’re described. It’s not surprising that animators have had fun animating these strange looking underwater dwellers. Whomever named these little guys, probably received hearty amens from all around. I mean, what else could you possible name these beings? This music also has a bit of mystery running through it. These are strange looking fish that may make you do a double take if you ever happened upon one. This music sonically captures the emotions that might come upon a one-on-one swordfish encounter.

Of course, even if you’re not particularly an ocean-lover, you can’t help but love this music. It may even cause you to take a deep, cleansing breath when you hear it. It’s just this meditative.